A Review of Osmos HD for Android

Absorb, or be absorbed… that is the question. Well, it’s a question with an easy answer as you’ll want to absorb everything smaller than you in Hemisphere Games Osmos HD. The game has been everywhere lately and with good reason as it had great success on iOS, its part of the Humble Bundle, and in less than a month it’s become a runaway hit on Android. 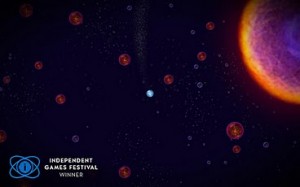 The world of Osmos HD is a colorful one and the hypnotic soundtrack might lull you into thinking it’s a peaceful one. Well, it’s not peaceful as you’ll soon find out when you venture to close to a larger mote. The basic premise behind the game is to stay away from bigger motes while absorbing the smaller ones so that you’ll be the biggest mote around. If only it were that easy… as you tap to move your mote you eject mass and that mass can form other motes or be absorbed by bigger ones. You also get a little smaller every time you tap to move which is something you’ll want to take into consideration when plotting your course.

Moving your little mote is simple, you’ll tap behind your mote to move forward and can tap in front of it to slow down or go backwards; it’s a very easy control scheme and a lot of fun to use. The game really makes good use of gestures as you tap to move, three taps gives you the menu, flicking right and left speeds up or slows down time, and you can get more precise time control by panning with one finger. It’s a great setup overall and one anyone can easily figure out.

There are two modes of play in Osmos HD with Odyssey and Arcade mode. Odyssey gives gamers 27 levels (8 different types) and takes you on a tour of the Osmos Blobiverse. Arcade mode is unlocked once you complete the Odyssey and lets you play the level of your choice at any difficulty. Osmos HD does a good job of breaking you into the game before really hitting you with some tricky levels; some levels you’ll literally need to float and take it slow while others require to make quick decisions. There are 13 different achievements to unlock along your journey as well, and getting them all will definitely be a challenge.

Osmos HD is a great game that will suck you in with its slick graphics and surreal atmosphere while wowing you with its unique gameplay. It’s also a game I think most people can enjoy no matter the types of games the generally play. I’ve got nothing bad to say about the game at all; it looks great, runs great, and everything is top-notch all around. There is a demo version available that will let you get a feel for the game while the full version of Osmos HD is a real steal at only $4.99. You can pick up Osmos HD in the Android market or for a limited time through the Humble Bundle for Android.