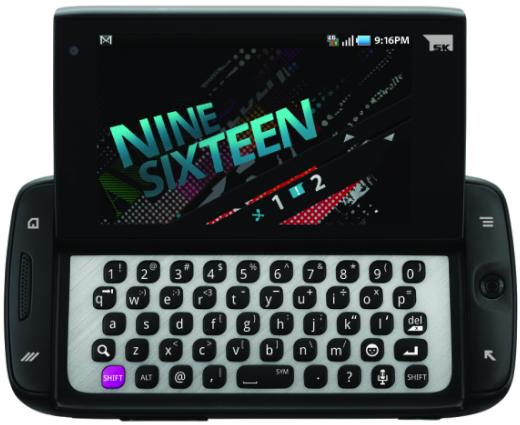 The T-Mobile Sidekick 4G by Samsung is an attempt to bring the Sidekick brand back to life on T-Mobile.  What was once considered a dominant teenage style smartphone with a sleek sliding keyboard mechanism had slowly died off with the iPhone and BlackBerry smartphone boom.  Fortunately, Samsung is looking to bring the iconic and memorable form factor back to T-Mobile, but this time slapping Android 2.2 and a 4G radio in it.  Is the T-Mobile Sidekick 4G are legitimate smartphone option, or just an attempt in vain by Samsung to capture a lucrative teenage demographic?  Those are the questions I will try to answer during my review of the Sidekick 4G.

Design/Display
The Sidekick 4G features a 3.5 inch touch screen WVGA display with a resolution of 480×800, which is a standard for mid-range smartphones these days.  The display won’t blow you away, but it certainly gets the job done in terms of gaming, watching videos, and surfing the web.

It is built in a similar Sidekick fashion with a sliding screen that pops up to reveal a five row QWERTY keyboard.  I personally liked the keyboard as it worked effectively to deliver fast text messages.  If you find yourself messaging often through texting, Facebook, or any other medium of communication, a physically QWERTY keyboard is usually a must.  And let me just say that the Sidekick’s keyboard won’t disappoint.

Now, the button layout on the Sidekick is rather interesting and unique from any Android device I have tested or seen.  Instead of the typical four capactive buttons taking up the bottom of the screen, Samsung chose to add four tactile buttons: two on top and two on the bottom.  The function of each button includes back, home, option, and jump.  The Jump key is a nice addition, in my opinion, as you can see which tasks are open and simply switch back and forth.  It’s similar to a long-press of the home button to bring up recently opened apps.

For those who have operated an Android smartphone before, switching to the Sidekick may require a few days of adjustment, but for those who are new to Android, you won’t notice anything out of the ordinary.  Perhaps the most disappointing part of the new layout Samsung chose to employ is the fact that the keys lack backlighting.  In the dark, I sometimes forget which key is where, and I can’t see the buttons since they do not light up, even when the phone itself is on.  In addition, there is an optical trackpad in the center of the lower portion of the device, but I personally didn’t use it too much during the review.

Features/Performance
Powered by a 1GHz Cortex A8 Hummingbird processor, the Sidekick handles most tasks well.  From time to time, there is some lag, but that is to be expected from a smartphone with 1GHz processor and not a tremendous amount of RAM.

The call quality is above average in my opinion, T-Mobile has solid service in my area, which led to practically zero dropped calls.  Both Bluetooth headsets and speakerphone quality were strong and the listener reported my voice to be clear.  Another important facet of T-Mobile’s network worth mentioning is the 4G service.  4G speeds are noticeably faster than 3G speeds and having a phone on T-Mobile with 4G is definitely a plus.  You most likely won’t reach the theoretical 21Mbps speeds T-Mobile advertises, but it is still faster than 3G.

The Sidekick runs Android 2.2, which isn’t bad for mid-range devices, but most high-end Android smartphones these days launch with Gingerbread.  Naturally, you’re missing out on some speed, UI enhancements, and other features in Gingerbread, but hopefully Samsung upgrades the phone to Android 2.3

Samsung runs an interesting custom skin on top of Android 2.2 that makes the Android experience a little bit more intuitive, which teens and young adults will probably find helpful, but seasoned Android veterans will likely find it cumbersome.  The lock screen has a simple drag mechanism to unlock the phone, and if you unlock it upwards, it will launch an app of your choosing.  In addition, there are three main panels on every screen (Phone, Apps, and Contacts).  By pressing any one of those three items, the appropriate menu will open.  Users have the ability to customize seven different screens with various widgets and apps.

T-Mobile really appeals to the teenage and texting fans since they pre-loaded Group Text and Cloud Text on the phone.  Group text essentially allows you to create and participate in reply-all group text messages.  If there are certain group of friends you often communicate with, creating a message thread for all of their numbers makes communication easy.  Cloud Text, on the other hand, allows you to text and read messages from a web browser on your PC.  Both of these pre-loaded apps are likely to appeal to the teenage demographic more than the businessperson or grandparent.

Most smartphones these days feature a front facing camera, and the Sidekick is no exception.  While it takes poor still shots, it’s good enough for video chatting and it comes pre-loaded with Qik.  Now unless many of your friends own smartphones with a front facing camera, I wouldn’t consider the presence of one a deal-breaker, but it is certainly a nice feature to have.  In terms of the rear facing camera, the Sidekick sports a mediocre 3.2MP camera and it lacks flash.  If taking pictures on the go is important to you, I would have to recommend finding a phone with a better camera that has flash, as most cameras come with a 5MP shooter and flash.

Final Thoughts
The T-Mobile Sidekick 4G comes off as a smartphone marketed towards teenagers and young adults.  Personally, I see nothing wrong with taking that approach, because in the end you have a fun phone with a lot of customizable options in terms of themes and backgrounds.  However, just be aware that there is a strong emphasis on texting, messaging, and keeping in touch with friends.  It is a stylish phone that bears resemblance to the original Sidekick form factor, only revamped with Android 2.2.

If you’re the type of person who lives on the cutting edge of technology and desires a fast, powerful smartphone, then the Sidekick isn’t for you.  However, if you prefer a mid-range device with a strong emphasis on quick messaging and social features, then the Sidekick is a great option — and the 4G support is a great kicker.  The Sidekick 4G is currently available for $129.99 with a two year contract on T-Mobile, and I think the price tag definitely matches the value of the Sidekick.