Shapes have become a popular game element lately and Cubes vs. Spheres from Shockpanda Games has quickly become a favorite of many gamers myself included. It’s a game all about Cubes, and it’s one of the best physics-based games we’ve played in quite some time. 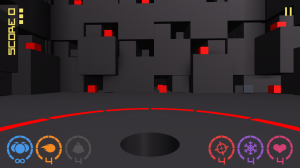 There’s no real story behind Cubes vs. Spheres, but we like to think that the Cubes got tired of the Spheres being able to roll around in all their spherical glory and decided to crush them once and for all. Premise aside the gameplay basically has you fling spheres at oncoming cubes, and if three cubes manage to make it to your area it’s game over. The mechanics are simple as you only need to select a sphere and flick it in the direction you want it to go. Aiming is handled through swiping the screen which pans around to either side of you. The game is simple to play, but taking out those cubes isn’t so easy. No good physics flinger is complete without cool ammo, and Cubes vs. Spheres has that covered with 6 different types of spheres. You start out with a single sphere, but as you progress you can unlock and buy spheres made of fire and ice along with a giant sphere, sharpshooter sphere, and a faker sphere. Once you unlock on of them you simply need to buy however many rounds you want before each level, and unlike other games you should never run out of cash so your arsenal will remain fully stocked. Cubes vs. Spheres offers up 30 levels that range from easy to hard, and there’s a survival mode to go along with around 40 achievements. There are 10 extra levels waiting for you if you can beat Hard mode, and there’s also a cool little easter egg (thanks William) that lets you unlock all the regular levels if you choose. All you need to do is tap the “vs.” in the title menu 5 times (it will turn blue) to unlock them.

Cubes vs. Spheres is a game that’s simple, yet fun and it can get pretty damned tough in the latter levels regardless of how much ammo you have. I really dig the minimalistic style of the game and the way the cubes react in their environments. At times it appears as if they have a life of their own and I was purposefully vague about how they come at you as I don’t want to spoil some of the levels. If there is a downside to the game it’s with the levels which are beautifully designed, but there’s just not enough of them. That’s not a knock on the game, it just tells you how good it is as it’s definitely going to leave you wanting more. I highly recommend checking out the game if you haven’t already, there’s no free version available but the full version of Cubes vs. Spheres is a steal at only $0.99.

Preview: Bulkypix’s Redneck Revenge
The Simpsons Tapped Out Review: Tap yourself silly in the Springfield of your Dreams