Herocraft’s The Enchanted Kingdom: Elisa’s Adventure has been out for a little while now, but recently got an update and a free version earlier this month. As I love anything free, I figured I’d finally give the game a proper play and after spending a few days traveling through Elisa’s world here’s what I thought… 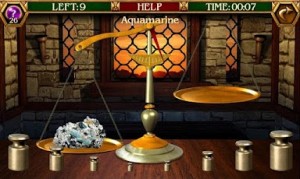 The Enchanted Kingdom: Elisa’s Adventure follows the story of a young girl named Elisa, and your job is to help her ascend to the royal throne. As you follow the storyline you’ll switch between Hidden Object stages and mini-games that work alongside the games storyline. The layout of The Enchanted Kingdom is different from most hidden object games as you’ve got a main screen with resources, tasks, and mini-games instead of just blindly going from one stage to the next. The game is easy to navigate though as you’re walked through the first part of the game which helps to get you used to the way things are setup.

There are basically 3 types of games/levels I’ve encountered so far with hidden object levels, match-3 levels, and mini-games. The hidden object games are fairly straightforward and usually involve helping someone find things to complete a task while match-3 games can help you gather resources like wood & stone. The first mini-game I got was a puzzle, and while it was simple to work they do get progressively harder. If you do happen to get stuck you can always use a hint which are found in hidden in the hidden object stages or you can buy materials for buildings through the in-app purchasing setup if you want to speed things up a bit.  Overall it’s been a nice mix so far and I’ve enjoyed the way all the puzzles tie into the storyline and the game itself.

As you progress through the game you’ll alternate between playing Hidden Object levels and following the storyline about Elisa’s Adventure. If you’re the impatient type you can skip through the storyline, but you’ll still have to complete tasks from the storyline to progress the game so I wouldn’t recommend skipping them. At the end of each level or mini-game you’ll get a score based on your time and other things depending on the level type. As for the extras The Enchanted Kingdom has a slew of achievements to shoot for with 43 in all. There aren’t any other extras to speak of, but you don’t really need them as there are more than 50 levels in the game which should be more than enough to keep most folks entertained for a while.

I played The Enchanted Kingdom: Elisa’s Adventure over the weekend and even though I’m not a big fan of Hidden Object games this one was pretty fun, and I liked the way the games alternate to keep things fresh. The only real negative I saw in the game is the fact that it doesn’t let you pinch-zoom in on objects. It’s not a deal breaker by any means, but it’s a nice to have on hand if you need it.  Zooming aside Enchanted Kingdom is a solid Hidden Object Puzzler that should keep folks young or old entertained. You can pick up the free lite version which lets you play the entire game, but adds in a few in-app purchases along with a few ads or the full version of The Enchanted Kingdom sans ads for only $1.99.