Last week we briefly talked about the release of  the official Wipeout from Activision and as promised we’re back with a full rundown of the popular game show turned Android game. 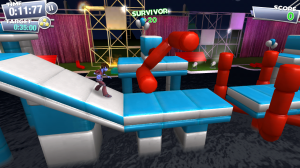 Wipeout lets you step into the role of a contest on the popular ABC show where you’ll have to run,  jump, and bounce your way through several tricky scenarios. The game’s levels are broken down by shows, and each show has you compete in a three rounds with the qualifier, knockout round, and the Wipeout zone. The shows get tougher as you progress and you’ll have to use coins earned through gameplay to unlock the next episode of Wipeout. 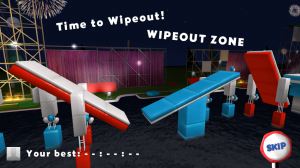 Playing a game like this on your mobile can be tricky, but the developers did a pretty good job with the control scheme. Your left thumb lets you run, sprint, step backwards, and duck while your right thumb controls jumping and diving. The controls work well once you get the hang of things, but they do feel a little off at times when you’re sprinting. I’ve noticed a lot of complaints about the bouncing balls and the controls, but I’ve not had any issue with that part of the game. It’s more of a timing thing as you need to hit the first ball dead on and time your super-bounce perfectly. As for the levels shows Wipeout has 1 season with 6 different episodes including The KO Corral, Strikeout, Old MacBallsy, and U.F. Ohhhhh. Each show has three rounds which gives you 18 levels in all; there’s also a Time Trial mode that lets you try for 3-star times on each round of the shows. As cool as Wipeout is the show layout puts a damper on things as you don’t need to beat the previous show to unlock the next one… you just need enough coins. Unfortunately coins aren’t that easy to come by so you’re going to end up having to replay previous shows and grind out time trials to unlock the cooler shows. 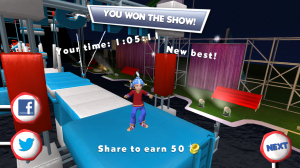 Shows are what you’ll want to save your hard earned bucks and coins for, but you can also buy power-up hats and unlock special characters and clothing. The characters have different attributes in a few key areas, but are pretty expensive to unlock; the headgear isn’t as bad, but is only good for one show or use so you’ll want to use them sparingly. That being said, it’s well worth a few thousand coins to be able to pass directly through a tough obstacle. Wipeout has around 28 different achievements to strive for and there’s a neat stats section that keeps a running tally of your statistics.

Wipeout is truly a blast to play, and it’s just as fun as you’d expect an obstacle course game to be. The shows, characters, and physics are all very well done and the instant replay feature is always good for laugh if you wipeout as much as I do. The only problem I have with the game is that you have to “grind” to unlock the last 3-4 shows (or any cool characters) unless you want to buy them outright which isn’t exactly cheap. Nothing we haven’t seen before, but it’s usually only an issue in free games and Wipeout isn’t free. 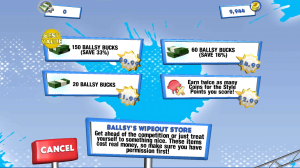 It’s not something you notice at first either as it doesn’t get bad until after the Strikeout show. The last 3 shows will cost you a total of 135,000 coins to unlock or around 37 ballsy bucks which is the games premium currency. 20 ballsy bucks will set you back $1.99 or you can pick up 60 for around 5 bucks. You can unlock everything through playing, but you may get sick of playing before you unlock the final show. Overall, Wipeout’s a solid game and tons of fun, but you can expect to grind it out or pay if you want to reach the latter levels. If you want to give it a go you can pick up Wipeout for $1.99 on Google Play.