Yumby’s are colorful little creatures and they need your help. The villain known as Captain Crumpet is trying to suck all the food out of  their homeworld, and it’s up to you to stop his treacherous plans. That’s really all we know about the Yumbies, well that and fact that they like to fling themselves headfirst into blocks. 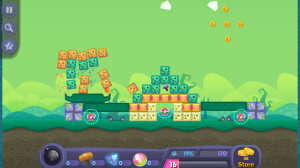 You’ll fling your Yumby around by touching it and dragging backwards just like you would in Angry Birds. What makes things interesting is the fact that you can actually slow down time mid-flight and change directions. This is extremely helpful considering the levels are huge and you’ll need to fling yourself all over the place to reach some areas. The slo-mo also comes in handy when you need to get into a tight spot or avoid dangerous areas. Yumby Smash has plenty of both… 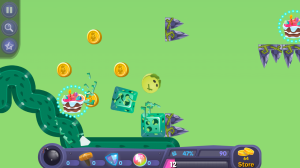 As for the levels there are around 90 of them, and to clear each one you’ll have to bust blocks and collect parts. You need to hit around 80% to get a 1-star rating and advance, but that’s extremely hard to do in the latter levels. Yumby Smash is an energy-based game and you’ll a little energy every time you move and you’ll give up a chunk of juice if you hit an enemy or hazard. Unfortunately the balance is off and you’ll end up having to buy a lot of energy power-ups if you want to advance in the game.

Now for the part all gamers dread… the shop or in-app purchasing system if you prefer. The Smash Store sells power-ups, coins, gems, and Yumbies. You can buy bombs, shields, hammers, and the all-important energy with your hard earned coins or you can unlock new Yumbies.  There are quite a few Yumbies to choose from including a new Android themed Yumby they added to celebrate Google Play’s birthday. You will earn coins and gems from playing (not nearly enough) and can earn a few from free offers; the prices aren’t horrible if you want to buy them, but they’re not that great either. 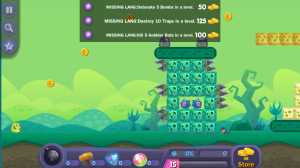 There’s a lot to like about Yumby Smash from the quirky graphics and cool sound effects to the way you fling the Yumbies around. Everything’s very well done, and it’s one of the better looking physics-flingers we’ve seen. The problem lies with the games balance, as the game gets tougher it starts to feel like a grind. You’ll also burn a ton of energy in the harder stages which means you’ll need to “revive” more often than not. That’s going to cost you which means you’ll spend a lot of time replaying levels or hitting up the IAP’s. 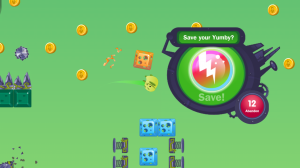 It also doesn’t help that it has massive full-screen video ads that pop up frequently throughout the game. They can be removed once you buy the Pro version or anything via the IAP setup; it’s just sad because the game is awesome, but basically geared to get you to buy something one way or another. Don’t let the Play Store ratings fool you either; it’s another case of users rating a game before they hit the ol’ paywall or for coins. Yumby Smash is fun to an extent, but it’s a game that you’ll probably end up uninstalling before you hit the 40 level mark. If you want to give it a go you can pick up Yumby Smash on Google Play.