Every once in a while you come across a game you just can’t seem to put down. Such is the case with It’s been awhile since I’ve reviewed any musical games, but Beat Hazard Ultra is an Android game that definitely calls for one. 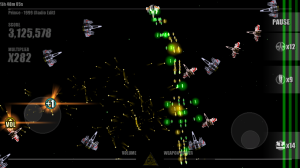 Beat Hazard Ultra is a dual-stick shooter that uses your music as the backdrop of the game… literally. Your music library generates the actual levels in the game and different things are affected depending on what track you play. Your weapons are linked with your music; the more intense the track, the faster you’ll fire. Same thing for your enemies, faster beats means more enemies. Needless to say things can get pretty intense if you’re playing Pantera or Saul Williams “List of Demands.”

Beat Hazard Ultra has several different game modes with Standard, Survival, Boss Rush, and Chill Out. You’ll probably spend most of your time in Survival Mode where you’ll try to stay alive through as many tracks as possible while shooting for a high score. It’s much harder than it sounds. Beat Hazard Ultra also has something called a “Boss Rush” where you’ll face wave after wave of Boss ships until you’re blown to oblivion or go into a seizure from the graphics. Not kidding on that last one, there’s a seizure warning when you start up the game. I told you the visuals were intense.

Any good space shooter needs cool power-ups and Beat Hazard Ultra has plenty of those as well. There are around 9 pickups in the game to go along with several perks. Some of the more interesting ones are the Volume Power Up and Beat Hazard Engaged. The Volume power-up cranks up your music when you hit it, but it also adds power to your weapons. Beat Hazard Engaged comes when your volume and weapons are maxed and it’s to say its cool would be an understatement. Perks are unlocked as you level up in the game, and once you’ve unlocked one you’ll be able to purchase them at will from the perks shop.

Beat Hazard Ultra is one of those games you hear about and think “Hmmm… I’ll have to try that out sometime”.  Well, once you pick it up it’s hard to put down and it’s one of the best space shooters I’ve played over the past year. I think I played 2 minutes of the demo version before buying it outright… and I also picked up the Visualizer because that’s how I roll. If you can’t tell I highly recommend this game to anyone that loves music as it gives you an interesting way to listen to your tunes, and if you’re into space shooters you’ll be in hog heaven.

There’s a demo of Beat Hazard Ultra you can try while the full version cranks up the volume along with adding new features like the ability to listen to some Internet Radio stations. Yeah… it’s well worth the $3.99 price tag. You can pick up both versions of Cold Beam Games Beat Hazard Ultra or it’s Visualizer on Google Play.