Become a Sith with Darth Maul Me for Android 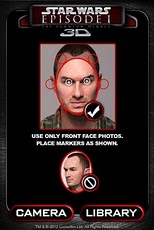 There is no shortage of Star Wars fans out there, but there aren’t very many good Star Wars Android apps and none by Lucas Arts until now. If you’ve ever wanted to see what you’d look like as a Sith you can now find out with the official Darth Maul Me Android app.

The Darth Maul Me app lets you turn your face into Darth Maul without the makeup and it doesn’t use the force either. Through the magic of Lucas Arts you simply take your picture (or use a previous one) and start altering yourself into a Sith. Your able to adjust things to fit by dragging cursors around the screen for your eyes and face shape and can also choose from full sith maks, partial or just the sith eyes. After that the Force goes to work and you’ve got yourself a Sithified’ picture to share or show off to your friends. 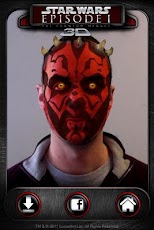 George Lucas has made some bizarre decisions over the past few years like all the edits “improvements” he’s done to our beloved Star Wars. Darth Maul Me is a great concept with a catchy name, but the App just doesn’t deliver. Yeah it works and does what it says… except for the fact that the effects fall well short of spectacular and it crashed several times. I was hoping for an actual “cool” app, but all we got was another tie-in to promote the 3D release of Episode 1. If you’re a Star Wars fan you’ll probably get this anyway, but it just didn’t do it for me. You can get Darth Maul Me for free in the Android market.