Google Play is full of Match-3 games. There are plenty of games that let you match jewels, animals, and brightly colored balls, but none actually use color as a weapon. Trinket Studios quirky Android game Color Sheep does just that as you take on colorful wolves using Woolson, a sheep with an amazing talent… 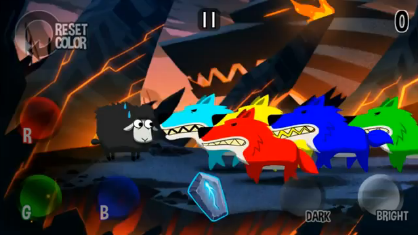 Everyone knows that wolves and sheep aren’t the best of friends, but the wolves of Color Sheep hail from Wolfcano which makes them a bit nastier than most. They’re out to steal color from the world and Sir Woolson, the Knight of Light is out to stop them. Woolson has the ability to blast colorful bursts of light from his mouth, and this is how you’ll go about taking down the evil wolves. 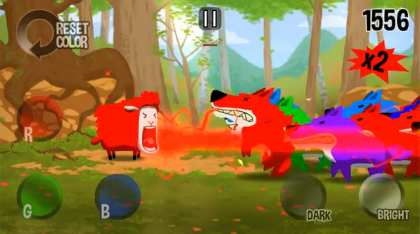 The setup behind Color Sheep is simple. One side of the screen has a green, red, and blue button while the other side has buttons for light and dark. If you have a bright blue wolf on the screen, you’ll want to hold the blue button and bright to turn Woolson blue. One he changes color you simple need to tap him to unleash a colorful burst of life that takes out the same colored wolf. The shades are easy to distinguish so you won’t have trouble figuring out light or dark. The game has a great tutorial and it’s really easy to get a handle on things before they hit you with the whammy known as color mixing.

After a few waves,  you’ll get hit with wolves that are red, green or blue which is when color mixing comes into play. To mix colors you need to pick your shade (bright or dark) and then swipe/slide over the colors you want to mix. You’ll have to have a little knowledge of basic color mixing like Yellow & Blue make green, but you don’t have to be master of the color wheel. That being said, things get extremely hectic when you’ve got cyan, brown, and yellow colored wolves coming your way. 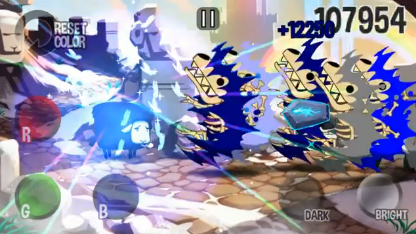 Color Sheep is a colorful little game that’s sure to delight gamers looking for a challenge. It may be a little tough for casual gamers or the younger crowd as the game does requires quick thinking and even quicker reflexes. Not saying kids can’t play it (my nephew tore it up), I’m just saying don’t let the looks fool you as it’s tougher than it looks. Once you get the hang of the controls you’ll be hooked, and the only real problem I had with the game is that I wish the wonderful power-ups would drop a little more frequently. They look extremely cool and they are very helpful in a hairy situation. If you’re looking for something different and a lot of fun you should lend Sir Woolson a hand and give Color Sheep a go. You can checkout Trinket Studios Color Sheep for $0.99 on Google Play.