Infectonator is a game about world domination, but you won’t be using robots or nukes to carry out the destruction. Well, actually there are nukes in the game but we’ll get to that later. Dealing death in Infectonator is done through the bite of a zombie and your goal is to infect and destroy every city on the planet. 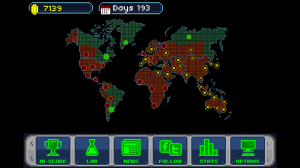 When you first start out in Infectonator you’re only armed with a simple infection and a few extra zombies. You start an infection you’ll just need to tap a group of pixel pedestrians and if the infection takes one or more of them will become zombified. Once you use up your infectious arsenal it’s time to pick up coins as you’ll get a coin for every person you turn or kill. Starting out I was happy to sit back and watch my zombies eat people, but quickly realized I needed grab as many coins as possible for upgrades.  You’re not just going up against regular pedestrians either and you’re going to need those upgrades as you’ll be confronted by policemen, S.W.A.T., Hazmat guys, and Biebers.

To even things up Infectonator gives you access to the Lab where you’ll be able to unlock new Zombies, add support items, and upgrade your infection. You start out with regular Zombies and as you progress you can unlock a total of 11 super zombies including some familiar faces like Jayson, Gigsaw, Zombie Reinald, and my personal favorite ILL Kim Jong. Most Infectonator’s characters are unlocked when you finish off a certain city although two can only be unlocked by finishing out the game.  Next up you’ve got your support items which include grenades, mines, goo, and canister bombs. There are 4 more super weapons but you’ll have to beat the game to unlock those as well. You can even get a Nuke if you can manage to beat the game 6 times.

Rounding out the Lab is the upgrades section where you’ll be able to upgrade your infection/zombies. You can increase your zombies health, speed, damage resistance, and attack while also increasing the chance of infection and direction of the spread. There are a few other expensive additions as well like giving your virus the ability to penetrate through walls and people or a coin magnet to help coin retrieval. Overall, there’s a lot of depth in the lab and while some of the upgrades are expensive all are achievable without spending any cash. That being said, if you do want to get an advantage in Infectonator you can buy booster packs of coins through the booster tab in the Lab.

As for the levels I don’t have a definitive count yet, but I’ve unlocked or completed around 40 cities so far and still have large sections of the map untouched. Each city is represented by a dot on the world map and will have its own set of objectives. You don’t have to complete them all to open the next area or city, but if you want to go for maximum destruction you’ll want to complete the tasks and wipe everyone out.  They usually range from gathering gold to killing a certain amount of people a certain way, but there will always be a time based goal involved.

I’ve played a lot of Armor Games flash games on the web and had heard of Infectonator, but I had actually never played it until last week. Infectonator is a pleasant surprise and I’ve spent more time playing it than any other game in recent memory. Everything’s tight from the graphics to the music and there are all kinds of cool little touches throughout the game. I’ll just say that any Zombie game that lets you play the zombie and take on mini-bosses like the Mario Bros, Bieber, and Ramboo is well worth a look. There isn’t a free version to check out at this time, but the full version of Infectonator is a steal at only $0.99.