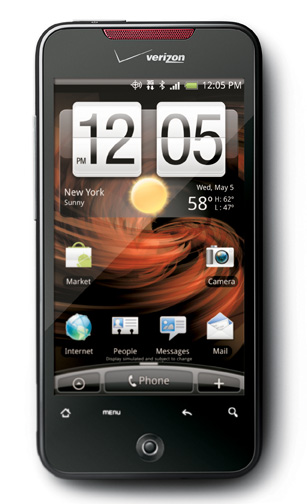 The new HTC Droid Incredible has finally been released. In the U.S., it is a top-of-the-line smartphone offered on the Verizon network. Incredible is both the name of the device and what we think about it. This smartphone lives up to the standard it has set for itself through its name. This new HTC Droid uses the Google Android 2.1 operating system. Although the phone doesn’t offer any new features above and beyond Android 2.1, it does have a software package (HTC Sense) that enhances the performance of those features like never before. The Nexus One and the Motorola Droid are rendered outdated with the release of the Droid Incredible, which has instantly become the best looking, fastest, and most powerful phone offered by Verizon. In addition, it is a close contender for best phone from any service, even outdoing its sister, the Sprint HTC Evo 4G.

Although there is nothing spectacular about the basic design of the Droid Incredible, it is the details that put this phone on a higher level than similar-looking phones. The Droid Incredible is about the same size as the Nexus One and the display is practically identical. The exact specifications are 4.63 inches in height by 2.3 inches in width. It is .47 inches thick and weighs in at 4.59 ounces. The only downside is that while it feels sturdy and well-built, the material has more of a plastic feel than a metal one. The capacitive touch screen display on the Droid Incredible has a WVGA resolution of 480×800 and measures diagonally at 3.7 inches. In this respect, it is exactly like the Nexus One, but what separates the two phones is that the Droid Incredible offers more vibrant colors and smoother edges. Some users have complained that it is too vibrant and colorful, but it’s really just a matter of personal choice. Another complaint, this one valid, is that the screen does not do well in bright sunlight. If bright enough, visibility of the screen is reduced to nil. Until the exact locations of the onscreen buttons are memorized, it is possible to miss some calls in bright daylight. Turning up the brightness may offer limited visibility, but you’d have to do it before you go outside or you won’t be able to see the necessary menus. The screen also attracts fingerprints and smudges, but this is nothing unique for a touch screen smartphone. 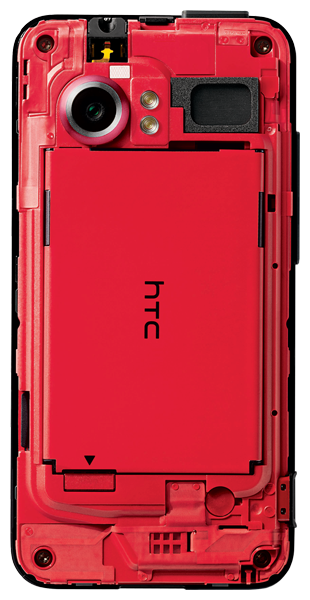 HTC replaces the standard Android onscreen keyboard with its own. The HTC keyboard is definitely a step up, as the buttons are slightly larger. The difference is quite notable in portrait view. Texting is not as fast as Swype, by any means, but much faster when compared to the Nexus One. Just below the display are four touch-sensitive hard keys with a left to right arrangement of home, menu, back, and search. In the center, bottom of the phone, below the hard keys, is an optical trackpad. Moving your finger or thumb over the trackpad moves the cursor in the appropriate direction, and pushing down on it will select. The sensitivity of the touch-sensitive keys is perfectly adjusted to respond with a light touch without being too sensitive. The only other hard keys on the Droid Incredible are a volume rocker on the left side and a power button on the top. Additionally, the left side contains a mini-USB port along with a 3.5 mm headphone jack on the top. On the back of the phone are the camera lens and two LED flashes. Instead of the usual smooth, elegant back, the Incredible has opted for a unique angular design. Hard ridges follow the pattern of the inside of the phone. When the back is removed, the inside looks much like the outside, except the inside, including the battery, is bright red.

Most people have not experienced what makes the Droid Incredible truly incredible – the HTC Sense interface software. This is one of the major differences between the Nexus One and the Incredible. While other phones have experimented with custom interface skins, the HTC Sense is the most friendly and usable. It improves performance of the standard Android features through more efficient integration. This all-new version of Sense is fast and accurate in its responsiveness. It can handle the maximum of seven home screens, all running different widgets, without any problem. This version of Sense has improved the media browsing options significantly. As well, email messages are now able to be displayed in a tabbed interface so unread mail and attachments can be reached with just a touch. The Agenda widget now displays the entire agenda and the weather widget automatically adjusts by location and displays on the home screen. The new widget for group contacts is also useful for categorizing contacts between work and friends. Another great feature of the new Sense is called the “leap screen.” Pinching the home screen displays thumbnails of all the panels so every app and widget is more accessible than ever. 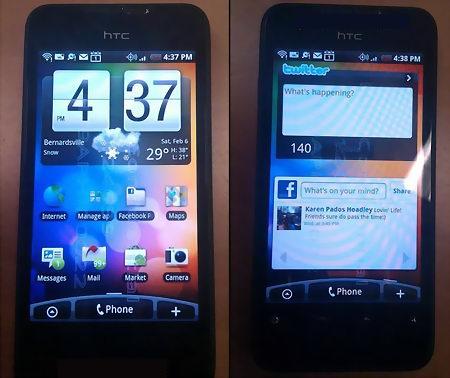 The HTC Droid Incredible offers all of the latest features of Android 2.1. Google Maps Navigation, Google Talk, YouTube, Android Market, and QuickOffice are all available. HTC also includes a few extra apps: Twitter, Footprints, and Peep. Besides Gmail, the Incredible also supports POP3, IMAP, and Microsoft Exchange accounts into an all-in-one inbox. A setup wizard is available to make the process simple. The contact management system is all very good and includes Facebook status updates next to each contact. The Incredible offers all the standard phone features: speakerphone, speed dial, conference calling, and text messaging. It supports Bluetooth, Wi-Fi, and 3G connections. This phone uses the Webkit browser for the internet and has the standard, ho-hum, music and video player, albeit with a slightly more attractive interface. This phone offers 8 GB of internal storage and is upgradeable through the expansion slot, adding up to 32 GB of memory. Verizon’s 3G network offers fast and reliable speeds for the Incredible. YouTube videos may take a moment to buffer, but it generally downloads 1 MB in 10 – 11 seconds. The overall performance of the phone is made capable by a 1 GHz Snapdragon processor and 512 MB of RAM. The 1,300 mAh lithium ion battery is rated at 5.2 hours of talk time, but tests show that it is closer to 5.5 hours. Overall, the HTC Droid Incredible cannot be beat by any other Verizon phone. Even if Verizon isn’t your provider of choice, this phone may just make it worthwhile to switch over.