Epic Pirate Story is a pirate themed simulation game a lot of folks have been waiting for, and a few weeks back it rowed onto the shores of Google Play. It took a little longer than expected, but after beating the treacherous Blizzardo we’re back with our review of Epic Pirates Story.

The gameplay behind Epic Pirates Story follows the standard sim formula as you’ll build things, gain new islanders, and go off on missions. There are no trips to the woods for ingredients in Epic Pirate Story though as you’re missions are actually battles, and there are a whole lot of them to get through before you reach the end of your journey. You start out with a ship and a couple of pirates, but as things progress you’ll add to your crew, get bigger ships, and better equipment. 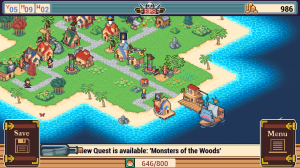 You’re not going to spend much time building structures in Epic Pirates Story, and there’s really not much to do when you’re on the island. Your pirates can improve their abilities by visiting certain buildings, but they are basically on autopilot for the most part . You don’t unlock new buildings very often either, and space is limited so you’ll want to think ahead as there’s no island hopping in the game. What you see is what you get. There are around 25 different things to build in the game, and you can also hold ‘events’ for your pirates to boost their stats. Again, the not a lot to see as the events are don’t actually show you’re pirates leveling up, you just get the stat boost.

While the building setup in Epic Pirates Story is pretty weak, the battling portion of the game has quite a bit of depth. Your missions are all battles that require you to hit the seas and take on all sorts of bad guys including pixely pirates and giant sea creatures. After each quest you’ll get XP, gold, weapons & armor; you’ll also unlock another quest and as you’d expect each is a bit tougher than the last. Certain quests are marked with a “Q” which means it’s a storyline mission that advances the game. You can take on missions in any order you choose, and oddly enough I found the storyline missions to be easier than the standard ones.

There may be a ton of depth in Epic Pirates Story due to the quests, but there are some issues in that department as well. Once you hit a certain level you’ll probably never lose a fight which makes the game feel like a grind. You’re also going to have a slew of weapons at your disposal which is great, but you can’t sell them off so you may find yourself short on cash if you do happen to fail missions before being super-powerful. Awesome job with the gear as a whole though; there’s plenty to choose from and it’s always great to get cool loot after a battle. The creatures and enemies are cool, but the battles are probably going to wear on you after a while as that’s really about all there is to actually do in the game. 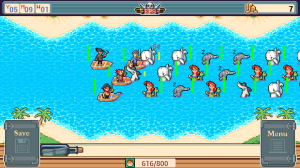 Epic Pirates Story is the first game from Epic Dev’s and it’s great to see they finally got the game out, and managed to put out a solid first effort. There are a lot of things to like about the game like the battling system, characters, graphics, and the depth. It falls a little short in the building part of the game though as there’s just not a whole lot to do and basically nothing to manage as far as your inhabitants are concerned. By the end of the game I had more cash than I could spend along with a crew of strong pirates, and I was actually ready for the game to be over as it felt like a grind. I wasn’t really impressed with the final battle either as I walked right through it.

Epic Pirates Story is solid first effort by the folks at Epic Devs, but it falls short in several key areas and it really hurts the game. That being said, people that absolutely love simulation games will probably still enjoy Epic Pirates Story, but it was too much of a grind for me in the end.  The full version of Epic Pirates Story is free to download, and if you like what you see you can pick up the donation version of the game for $1.27.

Puzzle Craft: Build Your Own Medieval City
Gun Bros 2! Do you like guns Bro? How about 2?