A few weeks ago we told you about an awesome game called Sugar, Sugar by Bart Bonte. Now we are back to tell you about another great game from Mr. Bonte called Factory Balls. 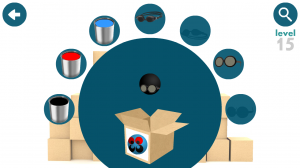 Factory Balls is a puzzle game about balls and boxes. Each level presents you with an open box, a white ball, and some tools. You’ll have to make the white ball look like the picture on the box using the tools provided – it’s much, much harder than it sounds. The tools vary from hard hats to grass seed and buckets of paint. There are goggles, paint scrapers, and flowers seeds as well. Factory Balls does a great job of breaking you in slowly as the first handful of levels are pretty simple. As the game goes on the balls get more complex, and you’ll probably curse at the screen by the time you hit the four layered flower balls. Factory Balls has no extras, but there’s also no in-app purchases. It’s a puzzle game in the purest sense of the word, and its 44 levels are really going to test your problem solving skills. It’s the “perfect puzzler” as far as I’m concerned, and it’s going to leave you wanting more once you finished the game out. It’s a game you’ll want to check out if you dig puzzle games, and it’s only going to set you back a buck. You can pick up Bart Bonte’s Factory Balls for $0.99. Factory Balls