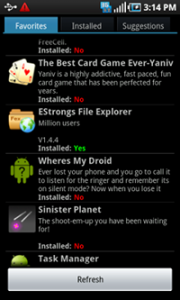 One advantage of  Apple iOS from Google Android OS is the App Store. Much as I don’t want to say it, but it’s easier to find apps from the App Store than the Android Marketplace even if you don’t have specific app in your mind. Meaning you are just checking out the apps market to find new apps that you could possibly install. To help you out in finding new Android apps that would otherwise get buried deep into the pile of Android apps in the Marketplace, Android-Apps.com has released our Favorites Android-App.

Favorites Android app is a dead-simple app and yet is definitely very useful. The app’s main interface will give three options – Favorites, Installed, and Suggestions. The Favorites option lists all the Android apps that you have favored from Android-Apps.com.  Select any of the apps and it will bring up several options to either – install the app, uninstall if you have it already on your phone, share the app with your friends, and update your favorites directly from your Android phone. In addition, you can also push Android apps directly to your phone from Android-Apps.com.

The Installed option lists all the Android apps you’ve installed on your phone. From there you can add it to your Favorites and it will be immediately listed under the Favorites option. And finally, the Suggestions option. This is the most useful feature when it comes to finding new Android apps to install. Favorites gives suggested apps based on what Android apps are already installed on your phone. If you don’t like the currently suggested apps, you can tap on the Refresh button and some new apps will replace the previous ones.

Each of the apps that are displayed by Favorites contain brief description of what the apps does as well as indicators if you have installed them already or not. The apps’ icons are also displayed and these icons add some eye-candy into the overall appearance of the app. 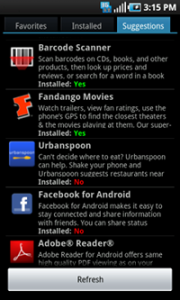 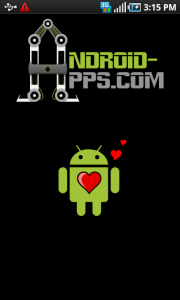