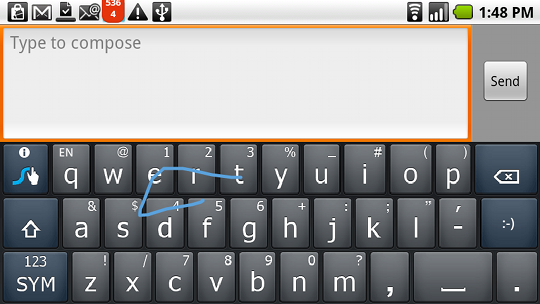 Yes of course, you might argue that you’re alright with the touch-enabled way of inputting text. But what makes Swype different is that it allows you to input text by tracing or “swyping” letters on your phone’s virtual keyboard. To make things much easier, Swype has a built-in database of most commonly used or perhaps even words which are not commonly used, so you don’t have to worry about not accurately “swyping” the right combination of letters to form your desired words. The app will magically display the words your want to input for as long as you tap the letters in sequence.

I have to admit that swyping letters on the virtual keyboard to form a word feels ackward but then I was using my fingers then. The experience would probably be better if I’m using a stylus pen.

If you’re want to explore on new ways of inputting text on your Android phone, Swype is a pretty good alternative.  But, if you’re so used to doing it by tapping on virtual letters , inputting text using Swype might feel weird at first,  but once you get the hang of it, you might not go back to the old way of doing this task anymore.

You can download the app directly from the Swype site. You won’t find it from the Android Market since the app is still in beta and not available for download from there yet.