Soldier Up with Frontline Commando: D-Day by Glu Mobile

D-Day World War 2; you are an American Soldier on the front lines in Europe fighting the Nazi’s, it’s time to kill or be killed in 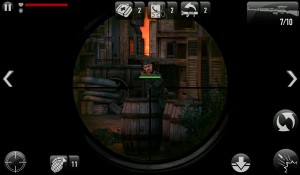 Frontline Commando: D-Day by Glu Mobile. Do you have what it takes? In this detailed and wonderfully crafted Android 3rd person shooter it is up to you to free Europe from the Germans and blow up some stuff along the way. Frontline Commando: D-Day will immerse you in the occupied countries during World War 2 and even give you a bit of a history lesson at the same time. So strap on your boots, put on your helmet, and lock and load  Soldier; it’s time to fight.

Glu Mobile did a really good job developing Frontline Commando: D-Day for Android; the graphics are pretty impressive giving you a feeling of really being in the game. Frontline Commando: D-Day is also quite accurate do the various battles during World War 2; taking you through Juno, Sword, Utah, Gold and Omaha with over 145 missions of play. There is no shortage of weapons to choose from while fighting the German Army, Aircraft, and Tanks; from the M1 Garand, Anti-Aircraft guns, Bazooka, and even Tommy Guns. As you progress through each mission you earn ‘warbucks’ that can be used to purchase additional weapons, upgrades, and artillery strikes.

Frontline Commando: D-Day can be somewhat difficult to control trying to use the touch controls to aim, shoot, and move. But after a few missions you get used to the controls and the game play overall becomes more fluid and enjoyable. Being a 3rd person shooter is an interesting change for an Android based game, but might not be everyone’s thing. 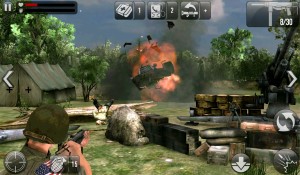 Final Thoughts about Frontline Commando: D-Day by Glu Mobile are that it’s a very well designed for Android game that has everything a gamer could ever want in a shooter. A nice addition to the game is the interesting facts about World War 2 that show during the loading screens. Go check it out, you won’t be sorry after you get a chance to kill Nazi’s for a while.