Bulkypix has continually surprised me with what they’ve put out over the past year, and their newest release is a pleasant surprise by the name of Goblins Rush. No platform game or puzzler this time around as Goblins Rush is all about those evil green goblins. 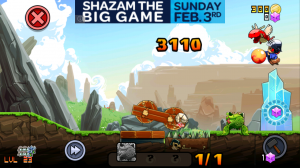 Goblins Rush is a Tower Defense games of sorts where you’re tasked with protecting the sacred Manacrystals from the goblin hordes. Each level requires you to stand on top of the Manacrystals and lay waste to the goblins that come in waves. You’re main means of taking out the goblins are fireballs, ice beams, and “The Force” which lets you pick up things and throw or smash them. You’re also going to get a “Nature” power that gives you the ability to place a plant tower that shoots spiky balls at the goblins. The controls are well suited for touchscreen’s so you’ll be killing goblins by the hundreds in no time. 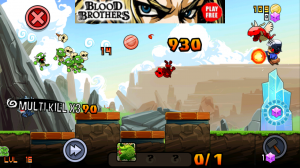 As you’d expect your tower and powers are all upgradable using mana cubes you win from beating a level. The cubes make your powers stronger, but they also unlock additional bonuses like bouncing fireballs or stronger ice cubes. As you progress in the game you’ll earn cash which you can use to buy items for your character like hats, pets, and magical orbs. You’ll also earn powerful runes for hitting milestones in the game; there are 21 runes and 21 items to go along with 72 levels spanning 3 different worlds. If that’s not enough Goblins Rush has three modes of play including the ominous sounding “Dark Mode” and online leaderboards.

Now for the goblins. Your enemy comes in many different shapes and sizes, and they’re quite clever to boot. In the first 20 levels or so I encountered bombers, armored goblins, archers, and foot soldiers. When I fired up survival mode I got destroyed 4 waves in by goblins pushing a huge wooden Trojan Horse… to say it was unexpected would be an understatement. There were also some mask wearing goblins; one was a healer and I have no idea what the other was doing, but I promise you it wasn’t good. I’m only a third of the way through the game so I’m guessing there will be plenty more goblin baddies in the latter levels. 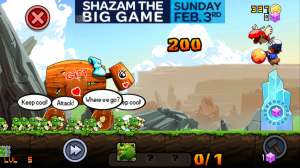 Goblins Rush is a nice quick play game that’s got some depth with its multiple modes of play and unlockable accessories. The game was much easier than I expected at first, but it definitely gets tougher and those Manacrystals are going to be destroyed more than once. The game is free to download, but ad supported and while they don’t affect gameplay they can be removed via an in-app purchase for $0.99. You can do this by hitting the “X” next to the ads at the top; it may take a few tries depending on your screen size but it does work and it’s worth it as the game is a lot of fun. If you’re in the mood to slaughter a few thousand goblins you can pick up Bulkypix and Tuesday Quests Goblins Rush on Google Play.