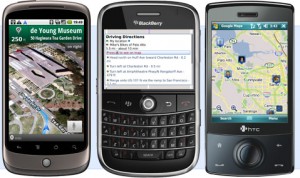 Google Maps is a very powerful Android app and a Godsend for those that want a hassle free GPS. Some phones, mostly from the older generation like the G1, may need to upgrade the Map software that comes with the phone, otherwise any new android handset with GPS has it by default. It stands up to the Google legacy quite well with it’s rich feature set and easy to use interface. The features included are:

So what does all this mean for the average consumer? That you get a powerful GPS Navigation and information system for free, and it works! Just think if you’re lost in a city or even a rural area and you’ve no idea where to go, just flip out your handy dandy phone for all your answers. Since the system is is powered under the hood by Google’s powerful search engine you’re bound to always have accurate and up to date information.

The interface is quite intuitive and has a very short learning curve since all you literally have to do is follow the prompts or quick menu. It most certainly is a viable replacement for a full-fledged GPS solution like TomTom or Garmin and since you don’t have to pay for it, Google seems like the easy winner. I say seems only because even the almighty Google has its achillies heel.

First off, there is the matter of coverage. Though Google Maps uses the buit-in GPS chip on the phone (sometimes it uses the cellular network too) for navigation the maps are dynamic, that is they download as needed to the phone using the 2G, 3G, or 4G Internet. This can be a big problem for many folks who either are not in an cellular Internet area  and or have a network provider that does not have wide coverage. I’m looking at you T-Mobile and AT&T! On Verizon’s network this issue is mostly nullified since they have great nation wide coverage for 3G service. 2G works fine too but when you need to make a turn and the GPS has not downloaded your path yet, well…let’s just say you don’t wanna be in that position.

Overall for reliability’s sake a dedicated GPS like those provided by other manufacturers is better for emergencies. However, if you want something that doesn’t need to be added to that already bogged down gadget belt and works great all while being for the affordable price of free then this is your GPS solution.