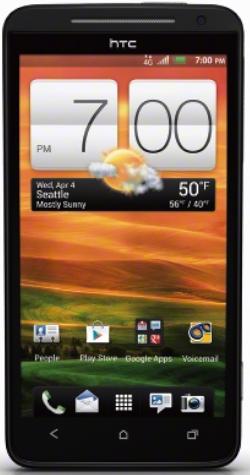 Up for review today is the HTC EVO 4G LTE on Sprint.  It is essentially the HTC One X on Sprint with a few minor tweaks and branded as an EVO smartphone.  After handling the device for a few weeks, I’ve come to appreciate the great design and functionality of it, but the EVO 4G LTE is hampered by Sprint’s tiny 4G LTE footprint.  It is hard to call the device a 4G LTE smartphone when it would never connect to a 4G LTE network.  Network issues aside, the EVO 4G LTE is a terrific smartphone and one of the best on the Sprint network.

When manufacturing the EVO 4G LTE, it is obvious HTC deliberated long and hard on the optimal way to make an aesthetically pleasing device that fits well in the hand and still delivers unparalleled performance.  My EVO 4G LTE is the black model fitted with a silver bezel and a glossy black matte finish on the back.  It feels sturdy in the hand, but it is a little bit slippery, so I would recommend purchasing a case along with the smartphone.

Now, one of the stand out features of the EVO 4G LTE is its 4.7 inch 1280×720 HD IPS display.  Even though 4.7 inches sounds uncomfortably large, I feel it is an acceptable size and necessary to render web pages, games and videos perfectly.  There is no comparison between the EVO 4G LTE’s display and the display of my G2X.  Even on low brightness to save battery, it still offers great screen visibility and made viewing any type of media a pleasurable experience.  For those big on graphics, the EVO 4G LTE offers a tremendous viewing experience, paralleled to none save for the Galaxy S III.

Some consumers worry about being unable to use the device with only one hand, but I had very few problems using one hand to navigate through the EVO 4G LTE.  While it is certainly a large screen, it doesn’t approach phablet territory since it is well under 5 inches.

Powered by a speedy Snapdragon S4 1.5GHz dual-core processor and 1GB of RAM, the EVO 4G LTE handles tasks and processes with ease.  Open up as many apps as you desire and the device will handle it without missing a beat.  Multitasking is easy and seamless with the dedicated soft-touch button on the right.  In terms of raw processing power, the EVO 4G LTE is up there with the best devices, except for the Galaxy S III with 2GB of RAM.  In terms of day-to-day usage, the processor and RAM held up fine and I have very few complaints.

On the software side, the EVO 4G LTE operates on Android 4.0 with Sense 4 and I personally enjoyed using Sense.  I would prefer to see some more tweaks with the notification bar, as it only displays a Settings button.  However, the lock screen was revamped to allow for four custom apps to be opened straight from the lock screen — simply drag the icon into the ring and it will automatically load.  In terms of widgets, the device comes preloaded with a Music player widget,  Agenda, People, Bookmarks, and HTC Watch.  While I personally don’t like using widgets, Sense comes loaded with many different kinds of widgets for those who enjoy using them.

The HTC EVO comes with a 2000 mAh battery, which provides for a solid battery life when running 3G, but 4G LTE does take a toll on the battery.  As with most smartphones, the battery is strong enough to last you a day, but don’t expect the same kind of performance like the DROID RAZR MAXX.  One aspect that I did not like is the fact that it comes with a non-removable battery.  This becomes an issue since you cannot swap in an extended battery or even carry around a spare battery.

At its core, the EVO 4G LTE is a phone and it handles basic phone functions such as calling and texting very well.  Call quality is excellent and the speaker phone comes through clearly and loudly.  Calls were never really dropped and the texts always delivered, which are important aspects of the device and Sprint’s network.

My main gripe with the device stems from Sprint’s inadequate 4G LTE network more than the device itself.  In terms of my day-to-day use, it never connected to 4G so I basically used it as a 3G device.  It is hard to justify spending $199 on a 3G device with slow network speeds, but if you live in an area covered with Sprint 4G LTE, then I am sure you will have a much better experience with data.

In terms of cameras, the EVO 4G LTE sports a rear facing 8MP shooter with 1080p video capture and a front facing 1.3MP camera.  For video chatting and self portraits, the front facing camera performs its function.  I did, however, very much enjoy using the rear facing camera as it takes high quality pictures in various situations.  Video capture in 1080p was superb as well.  If you are upgrading from an older device, I can almost guarantee the EVO 4G LTE will take better quality still pictures and video.

The HTC EVO 4G LTE is a solid smartphone, don’t get me wrong, but it is seriously hampered by Sprint’s network.  If you’re a fan of the EVO series, the EVO 4G LTE is a great progression as it offers great design and performance in a sleek manner.  If you live in an area with Sprint’s 4G LTE service, then I recommend the EVO 4G LTE as it should be receiving an Android 4.1 update in the near future.

If you do not live in such an area, then I would suggest waiting for the price to come down a little.  However, the bottom line is the EVO 4G LTE is a multimedia powerhouse and should operate nicely on 4G LTE coupled with unlimited data.