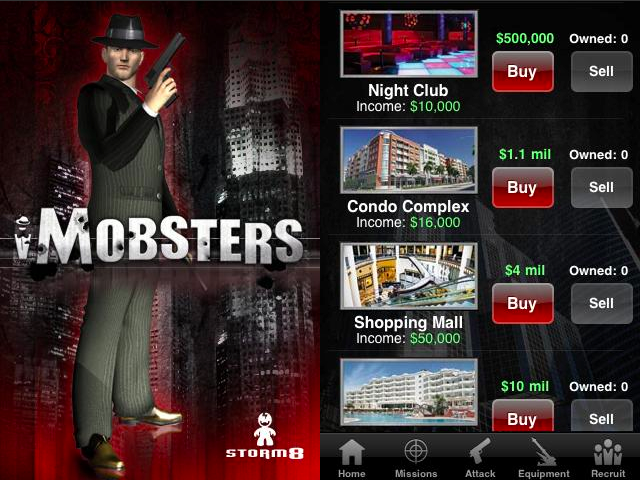 Storm8 has created several games for Android phones that are centered on performing missions, attacking other live players, and making money.  I have played iMobsters for a few weeks now and it is pretty fun but addicting as well.

You start off choosing a character and performing a few easy missions to make some quick money.  After you make money, you have the option to invest it in Real Estate (which then pays hourly dividends) or you can purchase weapons, protection, or vehicles.  By purchasing equipment, you are defending yourself from being attacked by other players and making it easier to beat other players in a battle.  Now, it is important to remember that battles can take place offline, meaning that even though you may not be logged into the game, you are still vulnerable to attacks.  This helps keep the game moving forward and allows for players to attack one another when they haven’t banked all their cash.

Users also have the option of increasing their mob by inviting other players to join it.  Basically, every account receives a unique code that you should distribute and hope that other players request to join your mob.  The larger the mob, the better protection and chance of winning you have.  Now that you have a mob, you can choose to add enemies to the hit list.  By offering a monetary bounty on a person you add to the hit list, it is likely that a fellow mob member will attempt to kill that enemy.  My only complaint with the game is that sometimes it is unresponsive and has a few glitches, but since it is free, it is expected to contain a few bugs.

My advice to a new player is to be patient and start investing quickly in Real Estate.