Into the Dead by PIKPOK – A True Test of Stamina

Into the Dead by PIKPOK

We All know that zombies might be slow and rather dumb, but when they are coming en-mass all you can do is run. And 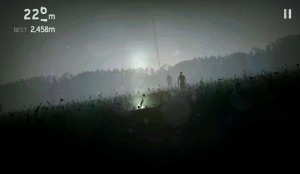 that’s exactly what you have to do in the 3D Zombie running Game Into the Dead by developer PIKPOK. The question in the coming Zombie Apocalypse is simple: How long can you Run?

In Into the Dead for Android you are stuck behind Zombie enemy lines running for your life. This game is a true test of anyone’s stamina and endurance. The premise of Into the Dead is simple; there are Zombies all around you…so you run. Along the way you are dodging zombies, running through forests, corn fields, and more. Into the Dead is a tilt sensitive Android game, tilt left you run left, tilt right you run right.

As you progress through Into the Dead you come across scatter weapon caches that will help in you in your marathon to safety, the starting weapon is a simple pistol but as you progress in the game completing missions you can unlock (or buy if you want to go that route) weapons to help improve your odds. Nothing beats unlocking the ultimate zombie weapon; the chainsaw however, a shame the gas doesn’t last long.

Into the Dead is one of those Android games that doesn’t end, you could run forever, but the zombies will get you eventually…they get everyone eventually. Into the Dead is definitely one of those never ending games that will have you addicted from the get go, so make sure your device is plugged in or has a good charge on it because you won’t want to put this game down once you start. Because if you put this game down, the Zombies will win, remember that. 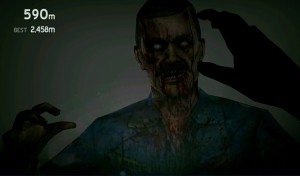 Final thoughts about Into the Dead: This is an awesome Android game that offers impressive graphics, addictive game play, and smooth control. PIKPOK has a real winner with Into the Dead.

So don’t forget to stretch those hamstrings because you’re in for the run of your life.