Escape to Fun in The Jump:Escape the City by Gone Gaming 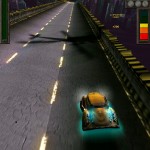 In the futuristic city of Monopolis fun is outlawed and your party just got busted by the fuzz. So hop in your hover car, pump the jams, and get out of the city in the wildly fun game Jump: Escape the City for Android, by Gone Gaming. Jump is an awesome mix of an action and driving game that uses the 3D graphics abilities of the Android OS to its fullest abilities.

In this city where fun is illegal your rave got busted by the World Corp mob and you’ve decided to try and leave the city hoping that things are better on the outside. Unfortunately there’s only one road out of town and it’s covered with road blocks, holes, fires, and other obstacles that you need to dodge and jump in order to reach your freedom.

Along the way you’ll need to pick up some speed otherwise the World Corp mob will catch up to you so hit the speed points (orange) and avoid the points that will slow you down (blue); your hover car will automatically slow down over time and if you slow down too much the anti-fun law will catch you. As you race out of the city you’ll also need to collect a certain number of the little green energy balls in order complete the level. Each time you play you earn coins that can be used to purchase power-ups that have various benefits such as a magnet that will help you collect the green energy balls, or a resurrection power-up that will save you from dying once within the game. 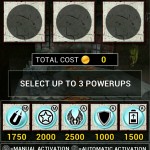 The Jump: Escape the City by Gone Gaming is a very entertaining 3D game on Android that also comes with a really good soundtrack featuring DJ Poet which is a nice change from some of the recycled, and sometimes annoying soundtracks offered by other games on Android. You will be challenged by Jump, the levels are quite difficult and are randomly generated each time you play so no level is alike. The only downside to Jump is that the controls are a bit buggy and stiff, by tapping on the left side of the screen you go left, right you go right, slide up you jump. Unfortunately these controls aren’t the most responsive.

Final thoughts, Jump: Escape the city by Gone Gaming is a really fun, free game that’s available on the Android Google Play store that will keep you entertained and challenged for a long time. If you want to cheat and buy some extra coins to help you purchase more power-ups you can at a fairly reasonable price. As with all 3D Android games Jump will eat your battery life pretty quickly, so keep your charger close by. Jump: Escape the City is a fun game that everyone should try out, but watch out for the controls because as mentioned before they aren’t all that responsive and will take some time to get used to.

So hop in your hover car and race off to fun.