Le 24 by Marco Pereira Will Test Your Math Skills

How good are you at math? Can you combine 4 numbers to make them equal 24? Try out Le 24 by 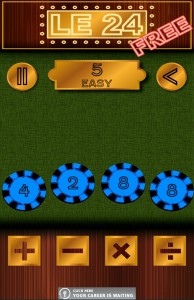 developer Marco Pereira and see how well you can add, subtract, multiply, and divide your way to 24.

Le 24 is similar to a math skills card game I played in school years upon years ago; only now you can play it on your Android device anywhere you want. While Le 24 is a math based game it isn’t just for kids, this game can help anyone freshen up their math skills and keep your mind sharp. And nothing shows how great you are at math better than being able to combine 4 numbers to make 24.

The game play of Le 24 is simple, you have the option of choosing from three difficulty levels (easy, medium, and hard) and then when in the game you see a set of 4 numbers. You have to find a way to combine those 4 numbers by using addition, subtraction, multiplication, and division to have the end result equal 24.  Initially the levels are quite easy to combine to get to that magic number of 24, but as you progress you will be spending more time scratching your head than actually finishing a level. That is unless you are some math genius.

Le 24 has 135 levels to play on, but you can only play the easy levels in the free version of this Android game to 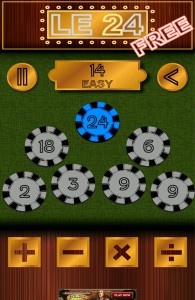 unlock the medium and hard levels you’ll have to upgrade to the paid version which is $1.28, not a bad price to sharpen your mind and challenge yourself a bit.

Final Thoughts on Le 24 by developer Marco Pereira are that this Android game is fun and will challenge both the math novice and math expert alike. Le 24 is a simple Android game to play and get the hang of but also one of those games that is difficult to master. I only wish that you could try out some of the medium or hard levels in the free version.

So go check out Le 24 and see how many times you can count to victory.