A few weeks back we told you about an awesome new Android game called New Star Soccer. As promised we’re back with a full rundown of this little soccer sim, I planned on doing a review last week, but couldn’t seem to put the game down long enough. If you dig Soccer or Sports sims of any kind, New Star Soccer is a game you’re gonna’ love. 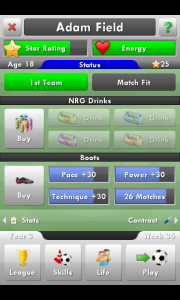 New Star Soccer is a sim, but it’s a sim that allows you to actually get in on the action. At certain times during a game you’ll be given the chance to steal, pass or kick the ball. Whenever it’s time to pass or kick you’ll line up your shot before being taken to a separate screen that lets you strike the ball. Sometimes the ball drops into the screen and others times it will roll across or just sit there. You’re able to “bend” the ball depending on where you tap it, and you’ll definitely need to learn that skill if you plan on making it far in the game. You can also speed up gameplay and increase your work rate during a game; I always appreciate when sims give you a way to speed things up and it works nicely in New Star Soccer.

New Star Soccer has two modes of play with Arcade and Career Mode; Arcade mode is fun, but Career mode is where most of us will spend our time. You basically play games, gain stars based on your performance, and then use those stars to raise your stats or purchase items. Most actions in the game will cost energy, but you won’t have to wait for it to fill back up like you would in a time-based game. Instead you can buy power drinks that can raise your energy and boost certain stats. Shoes are another way to boost your players abilities, but they are only good for so many matches so keep an eye on your boosts tabs as you play the game.

Even though New Star Soccer isn’t a time-based game, you will have to deal with your energy as it will be used in several different ways. You can use energy to boost your skills through training or to play match games that will boost your relationship with your boss, team, fans, and even your girlfriend if you’ve got one. The stars you earn during games can be used to buy “lifestyle” items like houses, vehicles, and gadgets which will raise your happiness and overall star power. They can also be used to gamble, but you’ll have to be careful with that. If you gamble too much in one sitting you’ll be marked as having a gambling addiction and you’ll lose favor with your coach which you definitely don’t’ want to happen.

New Star Soccer is a damned fine Soccer Sim, and next to Kariosoft’s games it’s one of the funnest simulation games I’ve played for Android. It has a TON of depth, and allows you to play multiple seasons, and switch teams as you progress throughout the game. I’m not sure how long you actually get to play, but you can basically play this one forever. It’s also not the easiest sim as you’ll soon find out when you get benched for the first time and have to work your way back up to being a starter.

Your relationships with your teammates, fans, and boss can all affect you during a game so you’ll want to keep those stats up or risk riding the pine after a poor performance. If you enjoy soccer or sports simulation games, New Star Soccer is an Android game you won’t want to miss. There is no free version available at this time, but the full version is a bargain at only $2.99. If you’d like to give it a go, you can pick up New Star Soccer on Google Play.