Nimble Quest is the newest Android Game from the fine folks at Nimblebit, makers of awesomeness like Pocket Planes and Tiny Tower. Nimble Quest has the cool pixelated vibe of their previous games, but with a large dose of Snake thrown in for good measure. It’s a game a lot of folks have been waiting for, and after spending several days with the game we’re back with our Nimble Quest review… 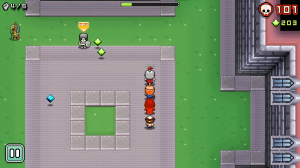 Nimble Quest is a game about heroes, villains, and lots of pixelated monsters. It’s also the fanciest game of Snake you’ll ever play. Instead of a snake you’ll form a line of heroes, and while you only start out with one you’ll quickly add to the line. Moving your line of warriors is as simple as swiping your finger in the direction you want them to go; if you hit the wall, enemies or obstacles you’re essentially toast. 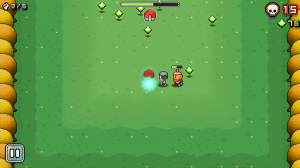 As you move about you can pick up any heroes that appear, and they will fire their weapons or abilities at any nearby monsters you come across. Monsters fire back though, so you’ll want to have quick fingers if you play on staying alive in the latter levels. The RPG elements come into play from your kills as each one counts towards experience and leveling up your character. Gems can also be used to upgrade your character or you can use them to temporarily boost your power-ups between rounds.

There’s  no level count in Nimble Quest, your only goal is to make it through as many rounds as you can. There is an Arena mode that lets you build up kills for your guild, but the endless part of the game is where the actions at. Unfortunately, that’s where you may run into issues as you have to start back at the beginning when you die unless you want to spend a token. The farther you make it in the game, the more tokens you’ll have to use to continue. Tokens are also used for buffs and as you’d expect, those tokens can be pretty hard to come unless you want to throw some cash on the table. The cheapest token pack is $1.99 for 20 while the most expensive pack will set you back 30 bucks for 20,000 tokens. 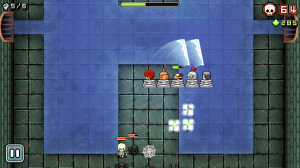 The classic game known as “Snake” is about as old-school as you can get, and Nimble Quest manages to put a quirky retro spin on the old classic. I’m not going to lie, the game is a lot of fun and you’ll probably kill countless hours trying to level up your characters and avoid monsters. The only issue I have is the same one I usually have… the IAP shop. Nimblebit did a good job with things for the most part, but the whole Token to continue bit will get old after a while. Bringing all 15 characters up to level 3 seems like it’s going to be impossible as well unless you’re highly skilled or want to drop some cash.

Nimble Quest may feel like a grind after you’ve played for a while due to the IAP system, but it’s still a blast to play and game well worth checking out. You can pick up Nimblebit’s Nimble Quest for free on Google Play.

Into the Dead by PIKPOK – A True Test of Stamina
Soldier Up with Frontline Commando: D-Day by Glu Mobile