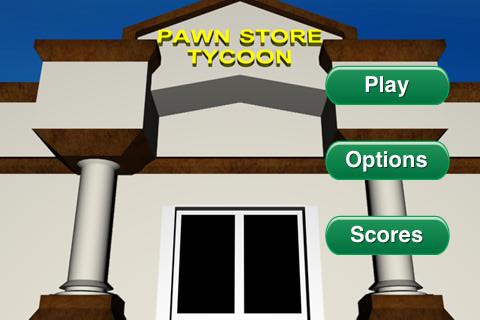 Ever want to run a Pawn Shop? Whether your answer is yes or no, if you like simulation games you have to admit it’s a great idea for a game. Well, that idea has been made real by the folks at WMD Entertainment with their new game Pawn Store Tycoon.

When you fire up Pawn Store Tycoon you’re given the options to run a tutorial, try freeplay mode or start the main section of the game. The main mode consists of 10 stages where you’re given a set of objectives and a time limit to complete them; they all generally involve buying merchandise cabinets, stocking them, and taking in items to the pawn shop. Once you get your store ready for the day, you just click “Open” and watch the customers come into the store. Every day you’ll see a customer with a special icon over his head come into the shop; this is someone coming in to sell an item and you’re going to need to negotiate. Once you click the customer they’ll give you the price they want and you’ll tell them how much you’re willing to pay. There is an estimated value price given, but it’s usually not that accurate so you’ll need to pay attention and be a great negotiator or pay an expert to give you their opinion.

As in all Pawn Shops it’s all about the merchandise, and Pawn Store Tycoon has around 16 different items for you to sell including firearms, dvds, computers, jewelry and guitars. All the items are stocked in their cases; all the cases are unlocked in freeplay while the main mode gives you a new one every few stages. There are 10 stages in the game, and you’re given a new merchandise case to take on every few stages. There are really no really options or extras to speak of, Pawn Shop Tycoon is one of those “what you see is what you get” kinda’ games. The gameplay is solid, but it would be nice to see some more stages, cabinets or extra rooms in the future. Even a highscore table or Openfeint would add a little something extra to the game.

Pawn Store Tycoon is a great idea, but one that needs a little work. On the good side of things the game is surprisingly addictive and some of the stages are pretty tough or were for me at least. There was one in particular that took me 5-6 tries at around 18 days a piece so there is a “little” bit of depth in there. As for the bad… not much depth, some missed touches here and there, and there isn’t an exit button. I honestly can’t believe developers still leave that all important feature out, and it’s a pain to have to task kill it to stop the music once you’ve backed out. The idea is solid and the gameplay is there, the game just needs a little work and polish. No free version is available, but if you want to give it a go you can get the full version of Pawn Store Tycoon in the Android market for $0.99.