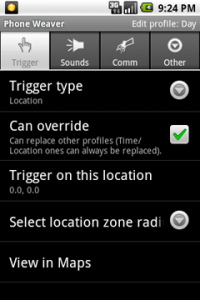 PhoneWeaver – The Profile Manager Android App with Tons of Features

When I say, PhoneWeaver is a feature-rich Android app, I really mean tons of features. In fact, it’s quite too many for such a simple app.

In a nutshell, PhoneWeaver is a profiles manager that lets you define smart profiles that can be activated automatically on settings that you specify based on time, agenda, power connection and location. It allows you to control how each profile behaves by setting sound, notifications, communications and more.  In a way, PhoneWeaver adds smart functionality to your already smart Android phone.

Smart profiles on the other hand are those related to the other functionality of your Android phone. These could include controlling sound-related aspects such as ringer volume, multimedia sound, ringtones and more. Smart profiles also lets you control communication related functionality such as GPS state, Wi-Fi, Bluetooth, Phone radio and more. Finally, there’s advanced smart profiles which you can use to launch specific apps once the said profile related to it is turned on.

Other features of PhoneWeaver Android app include – unlimited profile options, profile icons, profile selection, timeout activation, and lock profile. Additionally, you can add the app to your Android phone’s homescreen as a widget and also as a taskbar icon. 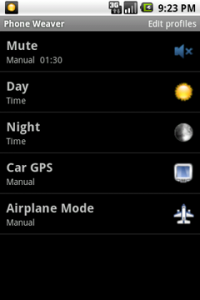 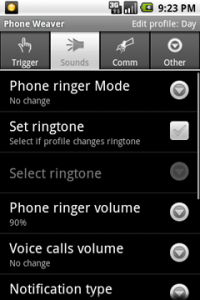 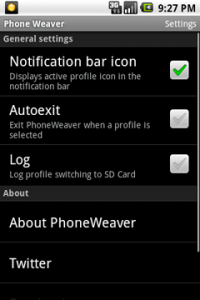 PhoneWeaver Android app is available from the Android Market for $2.99. If you’re like me and need some better organization in life or you keep on forgetting schedules, you’ll need to get this Android app now.