I love any Android game involving Evolution, and the “eat to evolve” games are always a hoot. Evofish is the latest game to try its hand at the evolving fish genre, and it pulls things off smashingly for the most part. 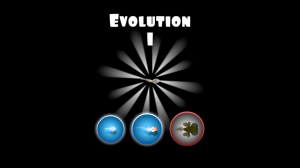 Evofish lets you play as lowly little fish, and you’ll have to track down and eat smaller fish if you want to make it out of the watery world alive. The gameplay is about as simple as it gets as you’ll want to stay away from anything bigger than you while eating anything else you come across.

Generally anything Red and large is bad, remember that. A fish you headed after may turn from evolve and go from green to red right as you get close. The world around you is constantly evolving so you’ll have to be quick and cautious in the world of Evofish.

You will get a bit of help from several different power-ups floating about in the waters or directly from you’re inventory. The bomb can definitely get you out of a jam, and super-speed works well if you want to try and evolve quickly. The handiest of all the power-ups are called resuscitates, and you’ll want to use those sparingly as they can get expensive once you run out. 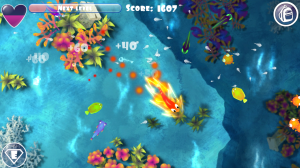 Evofish starts you out with one fish, but 3 more can be unlocked with seashells. There are 12 levels of evolution per species, and there’s a survival mode if you just want to swim around eating things for a while. You can also take on daily challenges to earn some extra seashells. 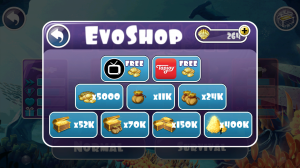 Evofish is a solid game, and I’m glad Bulkypix brought the game over for Android users to enjoy. Evolving your fish is fairly easy at first, but the difficulty does ramp up as you evolve and grow. It’s also a pretty tough game as you have to start over from the beginning unless you have some resuscitates on hand. Therein lies the rub, as you’re going to end up having to use the IAP/Tapjoy setup which you shouldn’t have to rely on in a paid game. Yup, it’s another paid game with IAP’s.

Unless you’re an Evofish master, you’re going to run out of seashells eventually as you don’t earn nearly enough through playing. We’ve seen this in paid games before, but it’s more of a downer for Evofish considering the iOS version is free. Is Evofish still worth a look? Yeah, just be prepared to play for ages, complete offers or plop down some cash if you want to see all there is to see. If you want to give it a go, you can pick up Evofish for $1.99 on Google Play.

Gun Bros 2! Do you like guns Bro? How about 2?
Luke at the Stars Review: Tearing Down Buildings for Love