Every gamer has a favorite genre, and honestly Endless Runners are at the bottom of my list. Agent Dash however is an Android game that does things a bit differently, and it’s one of the better 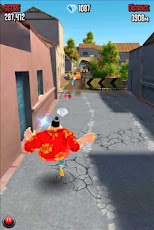 games I’ve played this year regardless of genre.

Agent Dash drops you into a world of action and intrigue as you play a Super Secret Agent that’s out on a mission. That mission is to destroy as many enemy bases as you by using your uncanny running ability and super secret spy skills. As it is an Endless Runner you’re going to do a lot of running, jumping, and dashing side-to-side, but you’ll also get to shoot and destroy enemy bases. If you’ve played Temple Run or any other running game you’ll be familiar with the controls as you’ll swipe up to jump, swipe left and right to dash in that direction, swipe down to slide under obstacles, and you’ll get to shoot when the time’s right by tapping the screen. If you run into anything, fall or come into any harm it’s game over. You’re score is based on how far you made it as well as how many diamonds you managed to collect.

The diamonds you collect during the game are Agent Dash’s form of currency and you’ll get to spend your hard earned cash in the Gadget HQ. Here you’ll be able to buy Super Diamonds, High Value Gems, Magnet’s, and even a Jetpack. The super-diamonds and gems let you earn more money while the magnet will attract gems for a few seconds. The jetpack… well you know what the jetpack does. If you don’t have enough Gems you can always get a few free ones for doing things or buy Gem packs from the store. You can also get boosts in the form of Air Drops, Gem Rushes, and Slo-Mo; if that’s not enough you can even call in Back-Up for a price.

One of my favorite parts of the game aside from the running part is the Agent Selection. Agent Dash gives you 10 different Agents to dash with including 3 different characters. You’ll get four 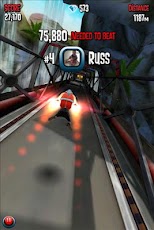 versions of Agent Dash, and four versions of the hilariously named Joanna Goodtug as well as JawBone and BobaJob. The characters are great, and I’d have to say the Retro ones are my favorite as you get an Austin Powers like Groovy Outfit Dash and a Retro Goodtug. JawBone and BobaJob will definitely make you crack a smile as well. Last but not least, Agent Dash has a stats section, a whopping 50 objectives to complete, and you can even log in and challenge your friends via Facebook.

Agent Dash is hands down the best Endless Running game I’ve played, and even though I don’t care for them much I’ve played about every good one out there as it’s part of my job. The gameplay is fast, furious and definitely not for the faint of heart or for those with slow reflexes. The graphics are also going to dazzle you; Agent Dash is an awesome looking game and the soundtrack suits it to a tee as well. If you haven’t downloaded this one already you’re really missing out on a great game, and a game that keeps you coming back for more. If you’re ready to have some frustrating fun you can get Full Fat’s Agent Dash for free on Google Play.