Last week Angry Mob Games and Fox dropped Predators, and as promised I’m back for a full review of this bloody little game. Predators is based off the 2010 movie of the same name, but instead of playing the human mercenaries you’ll get to play as a deadly Predator. 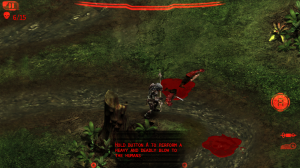 Predators plays out on a game preserve planet and you’ll get to hunt down all the characters from the film including Royce, Isabelle, Stans, Nikolai, Noland (unexpected), Hanzo, Mombasa, and Cuchillo. I didn’t notice Edwin, but I haven’t finished the game so he may pop up. Campaign Mode lets you go on 30 hunts which involve anything from collecting a set amount of heads/trophies to stealth kills or just having to outlast your enemies. Every so many stages you’ll get to have a “boss battle” where you’ll have to take on an assload of humans before finally getting a crack at one of the main characters from the film.

Next up is Survival Mode which has two different setups with Wave and Ultimate Survival. They are pricey, but a nice change of pace when you get stuck in Campaign mode. Controlling your Predator is done with a virtual joystick and a standard button layout. The layout isn’t horrible by any means, but I definitely had some issues with the two main attack buttons being a little too close together for my liking. One of your attacks involves lunging at your prey and grabbing them which was a bit hard to pull off at times. I was hoping you could adjust the layout, but unfortunately you can’t. Turning on your heat vision or stealth is easy though and both are just as fun as you’d expect them to be.

Any good hunting game has kickass weaponry regardless of the planet or the species being hunted. If you’re a fan of the movies you already know how awesome the Predator’s weapons are and you’re going to get to use them all… oh yeah. You’ll start out with wrist blades, but will unlock the combi stick, disc, net gun, plasma gun, and razor whip. If that’s not deadly enough for you each weapon can be upgraded which makes things a little easier when you get to the tougher stages of the game. It also makes taking down your brethren easier as you’re going to have to face off against your own kind the same way they did in the movie.

As a fan I’ll admit I got a bit excited before I even fired the game up, and for the most part I wasn’t disappointed. The only real issue I had was with the controls at times, other than that I found it to be a great movie tie-in game. The missions have been a blast so far, and let’s face it… you’re not going to really get tired of splitting people in half with your combi stick or taking their skull & spine for a trophy. Overall Predators is a bloody good time, and if you’re a fan it’s a “must-have” kind of game. If you’re ready to put your killing skills to the test you can head on over to Google Play and pick up Predators for $2.99.