Previously released for iOS devices, Subway Surfers finally hit Google Play and is now yours for taking and playing on your Android devices. I installed it on both my Galaxy S3 and Google Nexus 7 and have been hooked into the game since then. In fact, most of my free time last weekend was spent trying to amass as much coins as possible and to reach the farthest point into the game. Unfortunately, my obstacle-avoiding-skills are really not that great anymore and so I managed to collect only up to 10,000 coins. But anyway, I’m here to help you decide whether you should give this game a try. If you’ve played it before on iOS, you simply must play it again on your Android device. Here’s my quick take on Subway Surfers for Android. A Temple Run copycat, and so they say? Well, true enough there are many aspects of this game that can be traced to Temple Run. And so are other endless running game. So, don’t let it affect your decision not to download this game. It’s a great endless running game just like Temple Run. But unlike Temple Run, Subway Surfers is easier and a whole lot of fun! Playing the game is pretty simple. You take control of the game’s protagonist named Jake. He’s being chased by a Police and a dog after he and his friends vandalized a subway train. To control Jake, you simply swipe to the left or right to avoid obstacles along the way. Swipe down to make him slide down or swipe up to make him jump. Along the way, you’ll get power-ups and booster packs to make Jake perform various cool acrobatics. You can use hover jets, powerful shoes that can make you jump higher, and hover boards. You’ll also get to collect stars, and letters to get the bonus pack of the day. Of course, there are the familiar gold coins which you need to collect as much as you can. You can use these coins to purchase more power-ups. And that pretty much sums up the gameplay of Subway Surfers. Other noteable things about this game? Great graphics and cool sound effects that all add up into making Subway Surfer a trule worthwhile Android game. It looks great on both the Galaxy S3 and Nexus 7, and plays great as well. I didn’t notice any lag time or game freezing. Overall, if you love endless running games, don’t hesitate on whether you should Subway Surfers or not. You will surely love it. Subway Surfers is available now as a free download from Google Play. In-app purchase is available for power-ups. 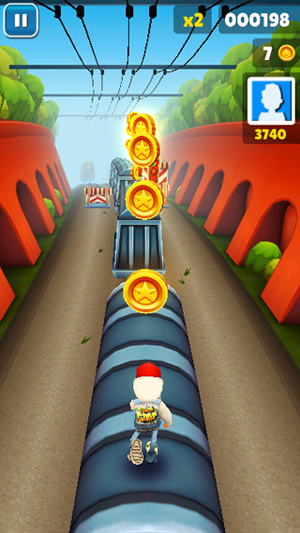 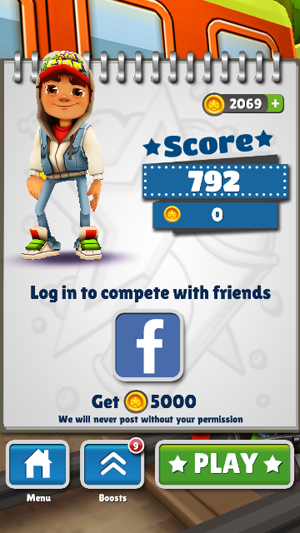