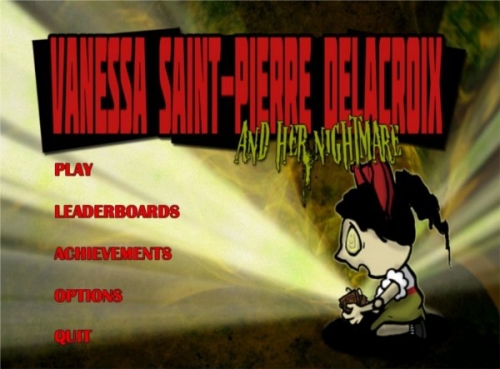 Vanessa Saint-Pierre Delacroix & Her Nightmare is an odd new Android Game from gamemakers Replay Games Inc. It’s a 3D puzzler of sorts, and it has a very unique gameplay mechanic that’s unlike anything I’ve ever seen. A great concept doesn’t guarantee a great game, so the real question is how does it play…

When you first fire up the game you’re given a screen along with a few options, but you’re basically put right into the gameplay after watching a few cutscenes that explain the story. When each level starts you’ll see Vanessa on the side of a 3D cube and your goal is to get her to the door on another side of said cube. This is where the game gets interesting as you’ll need to rotate whatever screen Vanessa is on and walk her into the next (screen) side of the cube when things match up. Once you find the door you’re off to the next level, and your score is based on how many turns it takes you along with time used.

Vanessa Saint-Pierre Delacroix & Her Nightmare gives gamers 36 puzzling levels and runs off the popular 3-star scoring system. You don’t need to earn 3 to advance though; you just need to make it to the door in each level. Options-wise, you can switch up the control style, turn on hints and change a few other settings, but that’s about it for the options. With the Extras you get access to Openfeint and around 12 achievements to unlock.