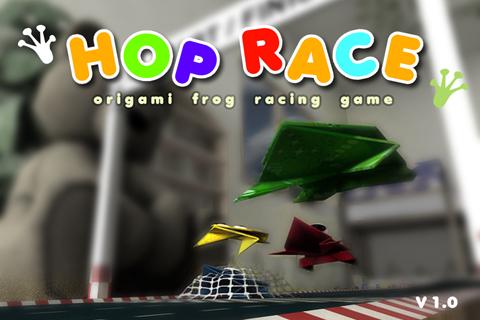 As mentioned in our previous article developers RanaSoft have released a slew of games this past week, and one called Hop Race stood out from the rest. It might not be the first Frog racing game I’ve seen, but it’s definitely the first Origami Frog racing game out there…

Controlling your Frog can be a little tricky as you’ll tilt your device to kind of steer and use the buttons/stick to move about. I had to really to some adjustments in the options menu to get it going right, but once I hit the right settings it was much better. . Hop Race has two modes of play with Single Race and Tournament; Tournament is the heart of the game and can be unlocked once you win a race in single mode. There are 12 tricky tracks in tournament mode and you’ll get 8 magical power-ups to help you win and take out your opponents.

If you like games that let you do a little customization, you’ll dig Hop Race as you get 3 different Origami frogs and 16 different skins to use on them. The skins range from cash patterns and kittens to country flags and leopard print. There is a nice stat tracking section that gives your best time and star count for single and tournament races along with a few other statistics. You can adjust the games difficulty, tilt sensitivity, and d-pad placement but that’s about it for the options.

Overall I found Hop Race to be a fun game and a great way to kill some time. It is a little rough around the edges in some spots, and the controls could definitely use some adjustments but it’s enjoyable nonetheless. I also didn’t notice any ads or in-app purchases which was a shock and pleasant surprise as well. If you’d like to race some Origami frogs, head on over to the market and grab RanaSoft’s Hop Race for free.