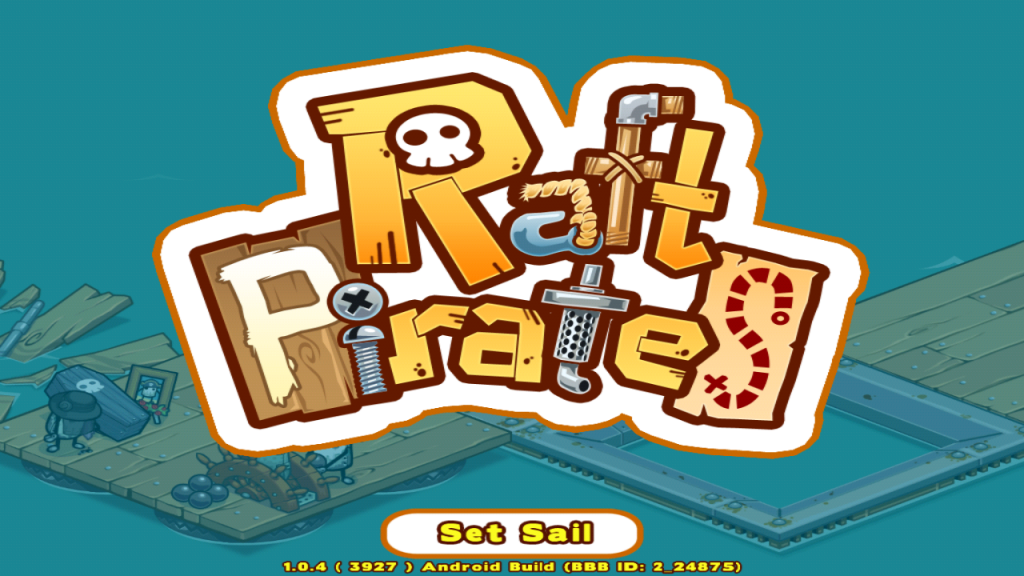 Pirate games come in many shapes and forms. Some games let you play as a pirate while others let you control the pirates’ ship. 6waves Raft Pirates does the latter, and it’s a soul sucking game that will whittle away at your free time and pull you in with its fun turn-based battles. Raft Pirates is a turn-based strategy game set on the open seas where you’ll work to build up your fleet and duke it out with other players and big bad bosses. Yup, there’s online multiplayer as the game is an MMO of sorts, and as the name implies your fleet is a bit unusual as well. Your motley crew is comprised of quirky robots with even quirkier weapons, and your fleet consists of rafts. Definitely not the usual fare… 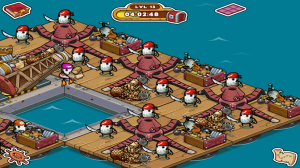 Raft Pirates requires a lot of strategy as you’ll need to customize your fleet regularly so you can attack and defend, and you’ll constantly have to totally alter your setup when you take on a boss. There are only two parts of your “fleet” that can’t be changed which are the “hub” and diving platform. Everything else is fair game as long as you make sure all your rafts are connected. 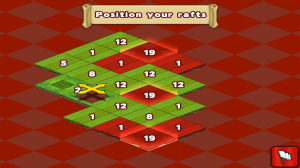 Stringing together rafts is simple, but fitting all your weapons onto each platform isn’t as easy. Each raft can only hold a certain amount of funky weaponry, and you’ll have to piece it together like a puzzle to maximize you’re attacking power. Each weapon has a set amount of BP and this affects your attacking power and defensive capabilities. You’ll have to cram a lot onto each raft to get things going at first, but later in the game you’ll get some smaller weapons with big BP. The actual fighting is just as interesting as building. You roll dice against your opponent in battles; the higher your BP the more dice you get to roll. The same goes for your opponents raft, and your BP also counts as HP so when it hits zero that piece of your raft is sunk. You can seek out players to fight or you can sit out in deep, dangerous waters and wait to be attacked. Why would you do this? That’s how you level up in Raft Pirates and it’s a nice little twist. 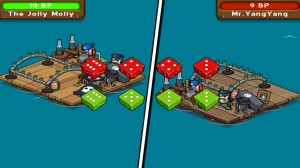 If you stay in deep water you’ll level up, but you can be attacked at any time. If you idle in the safe zone however, you won’t level up (or get good salvage), but you’ll obviously be safe. The timer keeps running when your offline as well in deep water which makes it rewarding to live dangerously in Raft Pirates. It can also be costly as some of the crucial parts you need to rebuild are hard to come by or very pricy. Therein lies the rub as Raft Pirates is a blast and you want to keep playing, but if you want to play continuously you’ll have to come out of pocket. 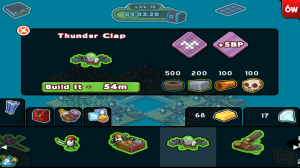 Raft Pirates is an over the top pirate game with a unique sense of style and plenty of action. It’s not hard to get a battle going, but if you play religiously you’re going to hate the wait times. The IAP setup is in full effect, but it’s not horrible as it really just depends on how you play and how much you like the game. Overall, Raft Pirates is definitely a game I think people will enjoy, and there’s a lot to take in as well. From the cool robotic pirate attacks to the simple sound of the waves, it’s all very well done. I highly recommend checking out the game for yourself, and can do just that by picking it up for free on Google Play.

Escape to Fun in The Jump:Escape the City by Gone Gaming
Help Jinx Fly Home in Jetpack Jinx by BubbleGum Interactive