Rayman Jungle Run review, could be the best Android platformer this year 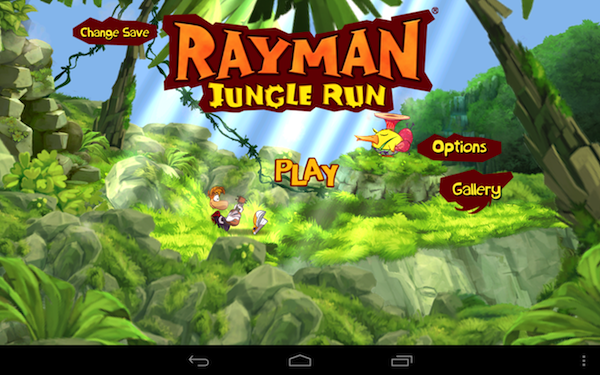 For more than a week now, I’ve been playing Ubisoft’s Rayman Jungle Run on my Nexus 7 tablet (and iPad 2!). In fact, I’m almost done with the game, having left only two special levels, but will get to that later. What I’m trying to say is that it’s seldom that this happens to me – playing the same game on two platforms. This only means that the game was able to get me hooked. And so I will have to say that Rayman Jungle Run is easily one of the best if not the best game I’ve played on Android.

First things first, Rayman Jungle Run is a platformer. While there are several of these type of game available on Google Play, I have yet to encounter a title which prompted me to play from start to finish. For this game, it entails 40 levels of pure platforming goodness which some of you may find a bit too easy to accomplish, but for moderate gamers, the game’s levels with the varieties of level designs are enough to bring a great gaming experience. 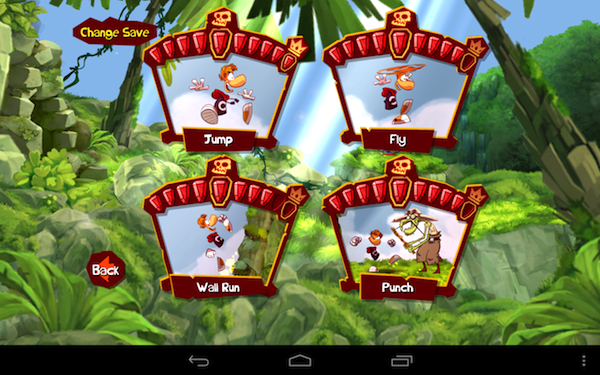 I mean, when it comes to level design, the game gives you just about enough length. You can finish a level in 30 seconds if your goal is to make Rayman run from start to the end of the level. So you can finish all 40 levels in 30 mins or more if you just want to finish the game. But that will make you half-satisfied since there lums to collect, 100 of them per level. Once you’ve collected all 100 lums in each levels, you’ll gain access to additional level. This time around, it’s more difficult but you don’t need to collect any lums. All you have to do is make Rayman run from start to end avoiding obstacles along the way.

Sounds fun? It depends on your definition of fun. If that means having more difficulty then doing this route in the game will definitely be fun for you. Even if takes repeating level for several times just to get all 100 lums. And then when you’re already playing the bonus level, I’m pretty sure it will also take you several tries to succesfully reach the end. And we’re talking here of four extra levels.

So what does each level entails you to do? Make Rayman run, jump, hover (like a helicopter using Rayman’s hair), and do a melee attack. Those four actions represent the theme of the four stages in the game. 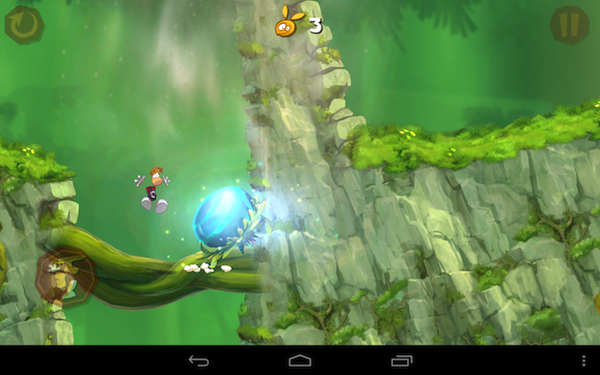 When it comes to control, the game uses simple touch gesture which you can execute anywhere on the screen except when executing a meleed attack. A virtual button appears on the right side of the screen during stage four of the game.

Other things worth noting about this game? The sound theme is one. It’s fun, lively and entertaing and somehow coincides with the level design. I mean, listen closely to the music as you play a level. You’ll notice that the rhythm somehow serves as a guide as to when you need to jump, fly, hover, etc.

Finally, graphics. I don’t have much to say about the game’s graphics. It looks awesome on my Nexus 7. The colors and details are good. You couldn’t ask for more.

Let me end this review by saying the Rayman Jungle Run is a solid Android platformer. It may not be the best Android game released ever, but it certainly is one if not the best platformer for Android. Grab it from Google Play, have fun and tell me if I’m wrong.

Conquer the World one Bite at a Time in Infectonator for Android
Quick review: Zaxxon Escape Android Game