Redneck’s come in all shapes and sizes and Red the Hero of Redneck Revenge is just your average hick hanging out at his bar trying to have a beer. Red’s fun is short lived however as Zombies show up and start eating folks which tends to ruin a good time. Luckily Red loves his firearms just as much as he loves beer, and he seems to be fully stocked up on both. He’s also got his Uncle Bob on hand to help out if things get a little too tough… 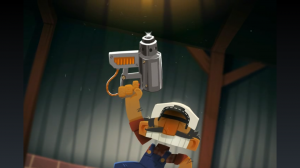 Each level in Redneck Revenge is a standoff. Red is usually behind a barricade, but occasionally you have to deal with zombies in the open. You’re able to move up and down by swiping in either direction and you simply need to tap the zombie you want to take out to fire your weapon. If one gets ahold of you you’re able to tap on them in hand to hand combat. You can usually get free of the first few, but if you’re not quick enough you’ll be eaten alive.

For the first few levels you can stand there and blast away, but one you start dealing with the gimp zombies on skateboards it’s a whole different ballgame. The girl zombies are also ones to watch out for early in the game. The levels are laid out on a map that spans four different areas including a bar, the highway, a junkyard, and Club 666. There are around 50 levels in all and it’s going to take you awhile to get through them unless you’ve got a maxed out M-16. Even then it will still take a few hours of straight gameplay so the game definitely has depth. That’s not even taking into account survival mode which you have to beat if you want the ultimate weapon. No good Zombie shooter is complete without cool weapons and Redneck Revenge gives you 7 upgradable weapons to choose from including a Beer Barrel and Spud Gun. As for the power-ups there are 5 of those, and each one is just quirkier than the next. Your “Grenade” is actually a chicken with a stick of TNT in its butt, and if that’s not powerful enough you can always call on Uncle Bob or the KamiKaze Ducks. Uncle Bob can become the most helpful power-up in the game if you place him properly so don’t be afraid to spend some cash on the old coot if you’re stuck on a level. The game also offers up some armor in the form of clothing; you’ll be able to deck Red out in different hats, shirts and pants that range from military gear to bunny slippers.

Redneck Revenge is a rock solid shooter that’s full of humor and gore. The game has a great style and the action comes fast and furious not letting up until you’ve taken down the last boss. I thoroughly enjoyed the humor in the game and the little touches like the singing Billy Bass in the bar and the dancing zombies in the credits… nice touch. I was also impressed with the balance in the shop setup and extra coins prices. You’ll earn a lot of money by just playing the game, but if you want to get ahead and buy some coins the prices are dirt cheap. I was able to beat the game easily when I maxed out my M-16 early in the game (not recommended), but still have a long way to go to unlock the Tank in Survival mode. Needless to say, if you’re in the market for a good zombie game Redneck Revenge is the one you’ll want to get. You can pick up Bulkypix’s Redneck Revenge for $0.99.

Vector Review: Running from the Man has never been this Fun…
Android Game Review: Wipeout from Activision