The name Terry Cavanagh might not be a name a lot of casual gamer know, but I guarantee they’ll remember it after they play his game Super Hexagon. We talked about this challenging little game when it was released last month and as promised we’re back with a full review. 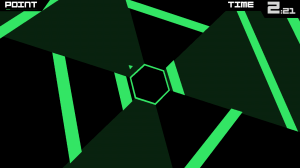 Super Hexagon is an intense game about shapes or Hexagons specifically. These are no ordinary Hexagons though, they’re Super Hexagon’s and they are truly maddening. The point of the game is to maneuver your little icon/triangle through the maze of a spinning hexagon from the inside out. You need to shoot for the openings and avoid the walls which is much harder than it sounds considering you’re constantly moving and so is the hexagon. The controls are as simple as it gets – you only have to tap right or left to rotate yourself in that direction. The simplicity of it makes it even more frustrating as it doesn’t seem like it’s all that hard until you realize you’ve spent an hour trying to last 12 seconds. Oddly enough one of the things I love about Super Hexagon is the way you die. As soon as you hit a wall it’s game over but you only have to tap the screen to go right back for another round. It also taunts you a bit by showing you you’re time and letting you know you only need to last 10 seconds to make it to the next level. You’ll get to that next level eventually, and you’ll appreciate how quickly the game throws you back in. Super Hexagon has 3 base levels of difficulty with Hexagon, Hexagoner, and Hexagonest. If you can manage to last 60 seconds in any of those modes you unlock its “hyper” version which is an accomplishment unto itself.

I’ve been covering Android games for 2 years now and I can safely say that Super Hexagon is the most frustrating game I’ve ever encountered… I mean that in the nicest way. The minimalistic approach of the game is perfect and the soundtrack from Chipzel is spot-on. The game walks a fine line between frustration and fun, and it does it perfectly as you always come back for more. If you haven’t played it yet there’s no time like the present, just be sure to clear up a little free time first. You can pick up Terry Cavanagh’s Super Hexagon for $2.99 on Google Play.

The Simpsons Tapped Out Review: Tap yourself silly in the Springfield of your Dreams
Vector Review: Running from the Man has never been this Fun…