The Simpsons Tapped Out Review: Tap yourself silly in the Springfield of your Dreams 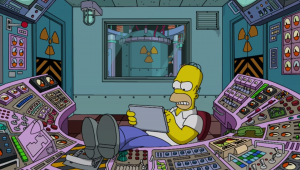 The Simpsons Tapped Out follows the story of Homer who’s had a bit of an accident at the Nuclear Power Plant that results in Springfield being blown to bits. Your job is to try and put things back together again, and you’ll do this by taking on a series of quests. The setup is that of your standard building game, but it’s very well done so building, completing quests, and accessing your town is a breeze.

Almost everything you build in The Simpsons Tapped Out is locked from the jump, and you’ll unlock new buildings, people, and decorations though completing quests. The quests can range from having Millhouse go to school to picking up garbage or promoting Duff Beer as Duffman. Almost every character you can imagine is in the game, and they all have their own specific set of quests and animations. There are premium buildings you can build from the start, but they’ll cost you donuts which will set you back real cash via the IAP setup.

The actual gameplay is slow at first, and you’ll probably hit the “wait wall” an hour or two in. The game has a notification system to let you know when tasks are done, and it’s actually not annoying for once as it uses voices from the show. Tapped Out is full of fun references from the series and there are a lot of mobile gaming jokes made in true Simpsons style. You’ll also get exclusive cutscenes made for the game as you progress as you only start out with Homer and Lisa and will have to find the other members of the Simpson family as you progress throughout the game. The Simpsons Tapped Out has an enormous amount of things to build and there looks to be well over 100 items including the premium ones. There are a ton of characters as well; you’ll get to see folks like Ralph, Krusty, Hank Scorpio, Hans Moleman, and Sideshow Bob along with dozens more. There are also scores of cool buildings like the escalator to nowhere, Scorpio’s Mountain Lair, Luigi’s, and Pimento Grove. If you can think of a building or character they’ve probably put it into the game which is awesome to say the least.

As great as The Simpsons Tapped Out is, there is a downside with the IAP setup. Money earned from playing will buy you a lot of stuff, but the cooler items are premium and those will cost you donuts. You can earn donuts slowly through playing or buy them outright, and as you’d expect the prices can get a little steep. It’s nothing we haven’t seen before and the prices aren’t outrageous, but it does impede your progress unless you want to spend real money to speed things up.

I’m old enough to remember watching the first season of The Simpsons and owning several Bart T-shirts. Needless to say I was pumped for this game, and it doesn’t disappoint for the most part. The graphics, sound effects, and background tunes fit the game perfectly and couldn’t have been any better. The whole game is polished and so well done that other building games should definitely take note. It does play slow at first, but once you start get a lot of characters and buildings to manage you’re good to go. If you’re a Simpsons fan it’s definitely the game to get, just clear up some free time once you get deep into the game as you’re going to do a whole lotta’ tapping. If you’re ready to start building your own Springfield you can head on over to Google Play and pick up EA’s The Simpsons Tapped out for free.

The Simpsons Tapped Out