Translate over 30 languages with this professional translator. You can write or speak not only singular words but AllTranslate can handle whole sentences and talks to you in a lot of languages. Or use it as reader of a newspaper article. Inclusive reference book and dictionary in over 30 languages for background informations of translated words.The eight benefits:1. Send the translated text straightforward to Friend Stream/Peep, WhatsApp or use E-Mail and Messages.2. Listen newspaper articles by using the same languages in FROM/TO buttons.3. Fastest translation during text input by realtime processing. You don’t have to use a button.4. Reference book in over 30 languages for background informations of translated words5. Dictionary in over 30 languages6. Text-To-Speech (TTS): Voice output of the translation.7. Dictate and write messages(SMS)/mails in your own language by using the same languages in FROM/TO buttons.8. Replace punctuation marks (point, comma, exclamation mark, question mark) for a lot of languages.***Note: You need an internet connection for translation***A few notes about the ratings:Plz don’t ask your questions on this site in the ratings because I can’t answer them in details. Questions or suggestions? Plz send me a googlemail. (s. mail below or within the app).The speech-to-text function needs the free Google-App: "VoiceSearch". You will find it here on the marketplace, if the version of your Smartphone-Software supports it.Languages: Arabic, Bulgarian, Chinese, Czech, Danish, Dutch, English, Estonian, Finnish, French, German, Greek, Hebrew, Indonesian, Italian, Japanese, Korean, Latvian, Lithuanian, Norwegian, Polish, Portuguese, Romanian, Russian, Slovak, Slovenian, Spanish, Swedish, Thai, Turkish, Ukrainian and Vietnamese. 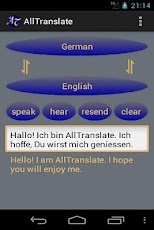 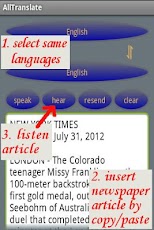 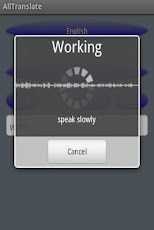 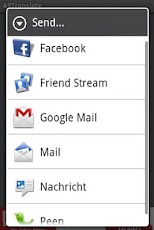