Ferrari HD wallpapersA collection of high quality images of Ferrari.More than 30 stunning high-resolution images to your desktop android devices thatapplication makes it unnecessary actions to choose and install on your phone.Features:- Only HD- Only the best, bright images  Original, high quality, convenient!A little history:Enzo Ferrari was born on February 18, 1898 near Modena. His grandfather sold vegetables, and his father, Alfredo worked rihtovschikom local railway workshops. One of this machine was the Ferrari Tipo 125, which appeared in 1947. Ferrari have had only one son (official) – Alfredino, or simply ‘Dino’, born in 1932. His first race win in the brand Ferrari took little competition on the track Caracalla in Rome. The Ferrari was Franco Cortez. His first victory at the Grand Prix Ferrari celebrated in 1949 in Switzerland, where Alberto Ascari Ferrari appeared at the compressor 125. In the same 1949 Ferrari took the first win at Le Mans. Total assets of the brand in 9 wins on this track, including six titles in a row from 60 to 65 a year. Ferrari himself created areolas mystery around his persona – in the mid 50’s he started to wear sunglasses in public, and so continued until his death, even indoors. One of the ugliest Ferrari is a version of 166 – the only Ferrari, which is being developed for the body in the UK. Ferrari team driver Mike Hawthorn was the first Briton to win the Formula 1 championship. In 1953, he snatched victory from Fangio, who spoke on the Mercedes. Ford tried to buy Ferrari in 1963 for 18 million dollars, but Enzo did not agree because of the refusal of Americans to give him full control of the racing division. In response, Ford created the GT40. First Ferrari 308GTB was presented in carbon fiber bodywork, which proved to be too fragile and was replaced by steel. 400GT in 1976 – the first Ferrari with automatic transmission. The most expensive Ferrari – it 250GTO, sold privately for almost 15 million dollars. In 1990, Sotheby’s auctioned the same model sold for 13 million. Currently, the Ferrari produced more books than on any other brand except Porsche. Just this year, in bookstores in Europe appeared 100 new publications – from the cheapest Cavallio magazine for $ 10, to book Dino: The V6 Ferrari worth about $ 70.Here you will find the most beautiful and high quality wallpapers high resolution.(480×854, 960×540, 1280×720, 480×800, 1280×800, 480×320) 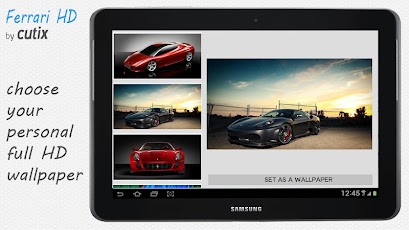