FIGHT! The most feared and powerful gladiators of Rome, Greece, gladiators of all kinds and with great force striking right and left with their swords, shields, maces, axes, blunt weapons able to open in a flash heads. No armed warriors ruthlessly fighting for their honor and that of his audience, which will see the unfortunate falls wrestler who loses in the Coliseum.High quality funds that fit your phone perfectly, and you can share with your friends and family at the touch of a button. Press and hold on the image to see the various options we offer, in addition to directly access a varied catalog of apps and everything of course free.This application uses ads, but we insist that you never have to pay anything for it and we will offer you juicy updates that will make your device a great world to live wonderful experiences.Feel part of the bustling Roman Colosseum and defeat the fearsome and dangerous gladiators.The origin of gladiatorial combat is to be found in the burial customs of the Etruscans, about the sixth century BC, one in whose monuments are represented, and, going back a little more, is likely to encounter any connection with the custom of sacrificing prisoners in the tomb of the dead hero in the war, practiced by some primitive peoples.They were a part of the funeral games of the Etruscans and seems to refer to the worship of Saturn, indicating that initially were held during the Saturnalia. These battles were introduced in Rome around the third century. C. As there had always prisoners that they fight while the body was burned at the stake, for that was the time it took for the gladiatorial duel, in which the blood was poured as a burnt offering to the dead, not missing brutish men who lent freely to fight. Such were the first gladiators.As with many other customs of antiquity, gladiatorial combat, which had begun as a rite of religious significance, ended up being a public spectacle which even inspired an unbridled passion.If one believes to Valerius Maximus and the Roman historian Livy in his "Ab Urbe Condita Libri" were the brothers Marcus Junius Pera (Roman consul in 230 BC., Roman Censor in 225 years. C. and finally Roman dictator in 216 BC) and Decimus Junius Pera (Roman Consul in 266 years. C. and Censor of Rome in the year 253 a.) who gave the first munus gladiatorium in year Rome 490, 264 a. C., Boario forum on the occasion of the funeral of his father, the equally celebrated Junius Brutus Pera, former Roman consul in the year 292. C. and direct descendant (of noble lineage Etruscan) of one of the founding families of Rome.The ancient authors, especially Suetonius, give many details of gladiatorial combat and intervention in such celebrations took emperors sometimes. For example, Nero did fight a day in the amphitheater to four hundred senators and knights. Trajan, back from his expedition to the Danube, was that in the 123 days of the festivities organized, combatieran ten thousand gladiators.Rules and schools lanistasAs many systems were designed for combat and varied sets and lots of each fight, fixed rules to art Gladiator, whose education was entrusted to the gladiators lanistas or older. In charge of them, were the gladiators tax, treasury or dependent, as the state kept them under a special scheme and paid them. Other lanistas boys recruited and maintained to fight in the arena, then rented for funerals, meals and other solemnities. No shortage of wealthy individuals who were not gladiators and the Caesars, of course, had the best. 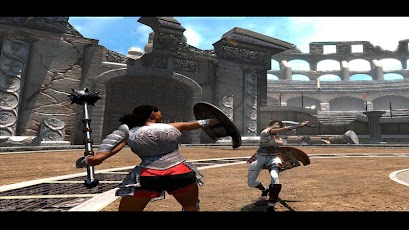