This version of Hearts is designed for a tablet.Hearts is a card game usually played by 4 persons, using a standard 52 card deck with ace rank high down to two. The game proceeds as follow :-1) All the cards are dealt out one at a time, until everyone has 13 cards..2) After the deal for the first hand, each player passes three cards face down to the player on the left at once. After the deal for the second hand, each player passes three cards face down to the player on the right at once. After the deal for the third hand, each player passes three cards face down to the player opposite. After the deal for the fourth hand, no cards are passed. The cycle repeats until the end of game.3) The player who holds the 2 of club leads to the first trick. The other players in clockwise order then play a card of the same suit, if they run out of card of the same suit, they can play any card. The player with the highest card of the suit takes the trick and leads to the next trick. A player can lead a heart only after a heart has been played or when he/she has only heart cards in the hand.4) When all cards are played, each player scores penalty points for cards in the tricks they won. Each heart scores one point, the queen of spade scores 13 points. However if you can win all the scoring cards, then all other players’ penalty scores are increased by 26 points.5) The game continues until a player has reached or exceeded 100 points. The winner is the one who has the lowest score.In this game you will play against 3 robots. 1) On the Welcome page, you select either a slow or quick mode and then click menu option Start.2) On the Play page if the game requires each play to exchange cards, you will be prompted to input three card positions to exchange. For example if you want to discard card position 1, 10, 13 for exchange, you input 11013 and then click menu option Exchange.3) On your turn to play you input a card position to play and then click menu option Play.4) The system will calculate the score of each hand and determine win/lose of each player when a score reaches 100 and then deal a new hand. 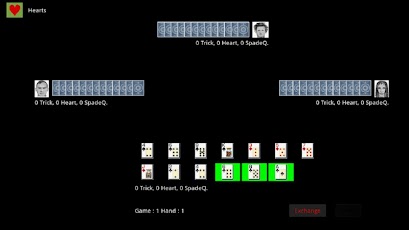 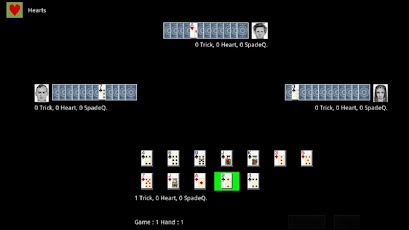 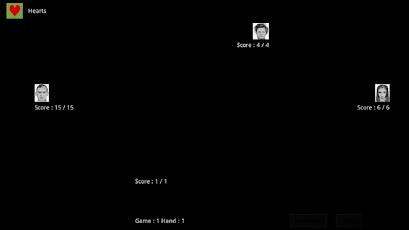