FREE Wi-Fi hotspot enables you to share internet connection between Wi-Fi enabled devices. You can imagine it like your phone converted into a Wi-Fi router itself and sharing internet between Wi-Fi devices.If you have Wi-Fi hotspot feature you can share internet between many devices and at the same time you can use it on your own phone. It should be noted that this is going to be a shared connection so speed limitations will be there.Usb Tethering refers to connecting one device to another. In the context of mobile phones or Internet tablets, tethering allows sharing the Internet connection of the phone or tablet with other devices such as laptops. Connection of the phone or tablet with other devices can be done over wireless LAN (Wi-Fi), over Bluetooth or by physical connection using a cable for example, through USB.If tethering is done over Wi-Fi, the feature may be branded as a Mobile Hotspot. The Internet-connected mobile device can thus act as a portable wireless access point and router for devices connected to it.USB tethering is just letting you use your phones 3G signal on your laptop or computer while it is plugged in using the USB cable it came with. It does the same exact thing as the protable wifi except it only allows you to connect since your the only one connected through USB, as with the portable wifi anyone in range can connectNote: This app is shortcut to wifi hotspot and has helping tutorial of wifi hotspot and usb tether 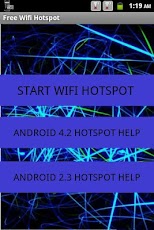 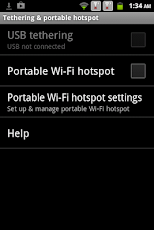