The Trial is a novel by Franz Kafka.On his thirtieth birthday, a senior bank clerk, Josef K., who lives in lodgings, is unexpectedly arrested by two unidentified agents for an unspecified crime. The agents do not name the authority for which they are acting. He is not taken away, however, but left at home to await instructions from the Committee of Affairs.K. goes to visit the magistrate, but instead is forced to have a meeting with an attendant’s wife. Looking at the Magistrate’s books, he discovers a cache of pornography.K. returns home to find Fräulein Montag, a lodger from another room, moving in with Fräulein Bürstner. He suspects that this is to prevent him from pursuing his affair with the latter woman. Yet another lodger, Captain Lanz, appears to be in league with Montag.Later, in a store room at his own bank, K. discovers the two agents, who arrested him, being whipped by a flogger for asking K. for bribes, as a result of complaints K. previously made about them to the Magistrate. K. tries to argue with the flogger, saying that the men need not be whipped, but the flogger cannot be swayed. The next day he returns to the store room and is shocked to find everything as he had found it the day before, including the Whipper and the two agents.K. is visited by his uncle, who is a friend of a lawyer. The lawyer was with the Clerk of the Court. The uncle seems distressed by K.’s predicament. At first sympathetic, he becomes concerned K. is underestimating the seriousness of the case. The uncle introduces K. to an advocate, who is attended by Leni, a nurse, who K.’s uncle suspects is the advocate’s mistress. K. has a sexual encounter with Leni, whilst his uncle is talking with the Advocate and the Chief Clerk of the Court, much to his uncle’s anger, and to the detriment of his case.K. visits the advocate and finds him to be a capricious and unhelpful character. K. returns to his bank but finds that his colleagues are trying to undermine him.K. is advised by one of his bank clients to visit Titorelli, a court painter, for advice. Titorelli has no official connections, yet seems to have a deep understanding of the process. K. learns that, to Titorelli’s knowledge, not a single defendant has ever been acquitted. He sets out what K.’s options are, but the consequences of all of them are unpleasant: they consist of different delay tactics to stretch out his case as long as possible before the inevitable "Guilty" verdict. Titorelli instructs K. that there’s not much he can do since he doesn’t know of what crime he has been accused.K. decides to take control of his own life and visits his advocate with the intention of dismissing him. At the advocate’s office he meets a downtrodden individual, Block, a client who offers K. some insight from a client’s perspective. Block’s case has continued for five years and he appears to have been virtually enslaved by his dependence on the advocate’s meaningless and circular advice. The advocate mocks Block in front of K. for his dog-like subservience. This experience further poisons K.’s opinion of his advocate, and K. is bemused as to why his advocate would think that seeing such a client, in such a state, could change his mind. (This chapter was left unfinished by the author.)K. is asked to tour an Italian client around local places of cultural interest, but the Italian client short of time asks K. to tour him around only the cathedral, setting a time to meet there. When the client doesn’t show up, K. explores the cathedral which is empty except for an old woman and a church official. K. decides to leave as a priest K. 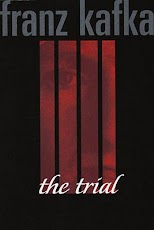