This application is a programming tool to compare 3 different ways of writing a custom ListView and ArrayAdapter. Run it, watch it, and see its log (filter: "RBLS")When installed, look for "Without ViewHolder", "With ViewHolder" and "With Cached ViewHolder" icons in your launcher. They are 3 ListViews, with different ArrayAdapter. What’s the more efficient?This app is released under GPLv3, so don’t hesitate to look its code, edit it, distriute it and show it in your classrooms. You’ll find the explanation and the source code at http://kcy.me/5l8j The banana magic icon of this app had been downloaded from http://ztreasureisle.wikia.com/wiki/Emerald_Island and is released under Creative Commons (CC-BY-SA)And the big picture at Android Market had been found at Wikipedia: http://upload.wikimedia.org/wikipedia/commons/8/89/Green_yellow_bananas_dsc07775.jpgEnjoy coding! 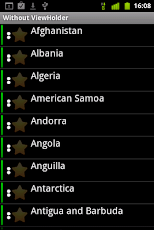 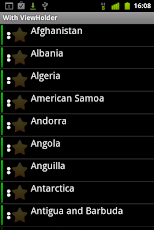 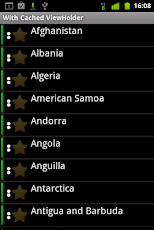