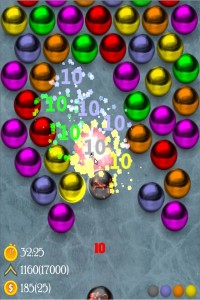 If you’re into droids and video games today is the day when good news are just around the corner! Enter Magnetic Balls Puzzle, the game designed to chase the boredom out of you!

Now,if you’ve ever played puzzle bobble and similar stuff, you’re already well familiarized with this type of arcade-game. What makes Magnetic balls puzzle different from its “relatives” is the magnetic thingy. This time the balls are magnetized, so the game mechanics are somewhat affected by the fact that the balls will stick together or sway instead of, splitting down when you hit the center/remain in the same place, as it happens in similar games.

Magnetizing the balls it’s a pretty cool idea and changes the game-play enough to keep you alert and tuned in for extended periods of time.

Plus, the game is a bit more difficult and with the additional challenges, you’ll be required to develop more skill hence after mastering Magnetic Balls Puzzle you’ll feel  more rewarded, if you’re a “play hard go pro” kind of person.

There are basically two types of game-play : an arcade version in which you can play endless puzzle games and a level-by-level mode, in which you’ll have to progress step by step with the difficulty increasing after each level. 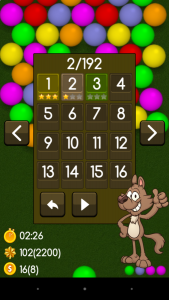 Obviously, if you want to start playing, you’ll have to visit Google’s Play Store first and to download and install the game (just click here).

To tell you the truth, I find playing through the levels more fun and more addicting than the arcade mode. You can change the difficulty or the balls (both the physics and materials) and there’s even a game mode for people with impaired color vision.

A cool thing that gives the game a special touch is the fact that you can change the design and feel of every level during the game. And if you were worried that you’ll finish the game quickly, rest assured : there are 192 levels to play for weeks in a row, that will keep you busy, I bet. And if that’s not enough, there’s always the Arcade section that features a “nightmare” mode if you’re already a pro or you just like a challenge.

Overall, this is a pretty solid game for your Android smartphone or tablet that runs fine on the vast majority of devices and presents a true challenge for every kind of  gamer (casual or “pro”).

The graphics are decent, the amount of fun when playing Magnetic Balls Puzzle is off the charts and maybe the best thing about this game is that it’s absolutely free of charge (you’ll have to cope with some adds in the process but they’re not annoying). 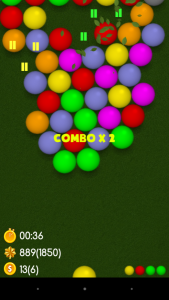 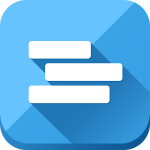 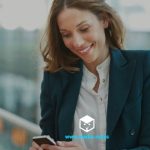